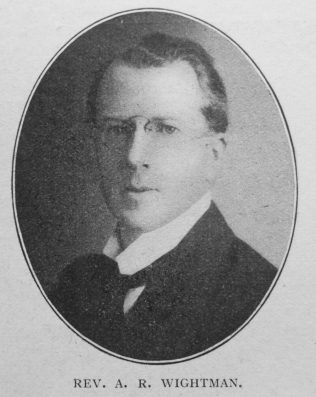 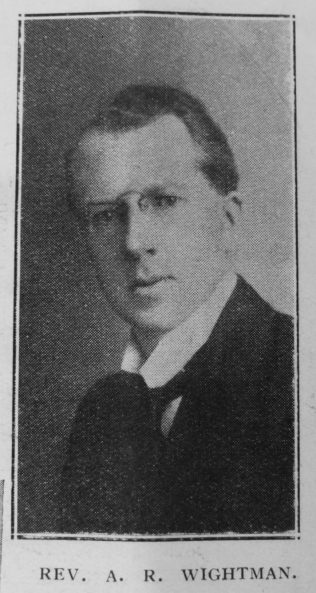 Transcription of obituary published in the Minutes of Conference.

ARTHUR RANSON WIGHTMAN: born at Binchester, Co. Durham, in 1884. After three years at Hartley College, he went to Rotherham, as a probationer, in 1911. In 1915 he was appointed to Faringdon, Berks, as superintendent, and thereafter ministered in Knaresborough, Swindon, Derby, North Shields, and Stockton-on-Tees, where he retired in 1948, but continued as an active supernumerary for three years. After that he preached regularly in the newly amalgamated Stockton circuit almost to the day of his death. He held district offices in the Primitive Methodist Church, and took an active part in the social life of the community, being Mayor’s Chaplain eight times in four towns. For the last eighteen years of his life he was Nonconformist Chaplain at the Stockton and Thornaby Hospital. He was an efficient administrator, on more than one occasion directing the building of new Methodist premises and liquidating circuit debts. His quiet and sympathetic approach to people both inside and outside the Church made him an effective pastor and a valued friend. In failing health he continued his work as hospital chaplain most conscientiously to the day when he himself became a patient for a somewhat overdue operation. He had given himself so unsparingly to his ministry that he had insufficient strength to recover from what was considered a successful operation, and he died on 15 November 1958, in the seventy-fourth year of his age and the forty-seventh of his ministry.

Arthur was born on 1 April 1884 at Binchester, Co. Durham, to parents Charles, a stationary engine driver (1901) and Margaret.

In 1901 Arthur was working as a wholesale grocer’s clerk.

He married Ethel Richardson Henderson (1886-1972) in the summer of 1915 in the Auckland Registration District, Co. Durham. Birth records identify one child.