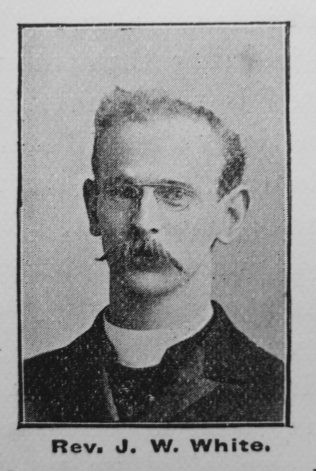 Transcription of Obituary in the Primitive Methodist Magazine by P.J.

The Rev. J.W. White was born at Guisboro’, Yorks, on April 20th, 1872, and passed up to God from High Wycombe on the 5th June, 1900. Short, indeed, was his earthly sojourn, pathetically transient was his ministry, but he fulfilled the Divine intent, and his life meant blessing to not a few. He was an only son of Mr. and Mrs. William White, who on some of our Northern and Southern Circuits have lived in the esteem of our people and given of their best to our church – the chief of their gifts being that of their son – religiously trained, the pride and hope of their lives, to labour in the ministry of the Church they loved so well. It is not surprising, with such an upbringing, that he at the early age of 16 heard God calling, and gave an instant and hearty response. It was under the earnest ministry of the Rev. H. Errington that our brother entered the King’s Service. From the first he shaped well, and his religious activities soon marked him for useful service. In his 17th year, the late Rev. R.G. Graham, on the Eston Circuit, placed him on the plan, and two years later, such was his promise, he was recommended for the ministry of the Barnard Castle Circuit. At the candidates’ examination he secured the fourth position on the list of seventy-six candidates. Glastonbury was his first station, and he realised there a blessed measure of success. Sinners were converted, the Church revived, and soon it became a self-supporting station. Subsequently he laboured at Buckingham, Chichester, Belfast – all of them mettle-trying spheres – but in each place his preaching was in demonstration of the Spirit and with power; and his personal character won him many friends, and our cause many adherents. In 1898 he married Miss Hale, of Bognor, and was stationed at that critical and difficult outpost – a trial to many – Edinburgh. It was here where his health broke down – anxiety and earnestness damaged life’s wheels and the Northern capital had to be forsaken for the milder climate of High Wycombe. Here he bravely faced the duties of a wide circuit, until a very severe attack of influenza prostrated him and developed phthisis, rendering further service, save that of a cheery patience and noble resignation, impossible. Early called by God, it was patent he was now to be called to God, and after many days and nights of weakness and weariness borne as they can only be borne by the angel-supported, God’s finger touched him and he slept. The tributes to his moral and spiritual worth are many and touching. Those to whom he was best known all sound the same note, and tell us he was a man who lived with God and for God. Life to him was sweet because it afforded an opportunity for doing God’s will. As a preacher he was thoughtful, earnest and spiritual; as a pastor he was diligent and successful; as an administrator he proved himself skilful and able, while his ever kind and genial disposition opened for him many a door for usefulness. The Rev. C.H. Llghtfoot writes: “During the twelve months that he was my colleague on the Braintree and Bradfield Station, I had much enjoyment in his company, and was much impressed with his intelligence and ability as a public speaker, and I had confidence that as he became older in Jesus he would be highly appreciated as a member of our Church. I listened with great profit on one occasion to a sermon of his and I thought it was suitable for any pulpit.” At funeral a solemn crowd silently did reverence to departed worth, and showed sympathy to the bereaved. Enigmatical indeed is the Providence which thus removes the young, the holy, the promising, those whom earth seems to need so sorely – but God knoweth what is best – and through their tears the bereaved can sight their loved one in that other Chamber of the King, larger and lovelier than this.
Be strong, my soul!
Thy loved ones go
Within the veil. God’s time, e’en so;
Be strong.

John was born to parents William, a blacksmith, and Elizabeth.

Before entering the ministry, John worked as a tailor.

John married Sarah Alice Hale (b1874) in the spring of 1898 in the Westhampnett Registration District, Sussex. Sarah is identified as a sister of the people in the 1901 census, visiting the home of Rev. John Jopling at Bradford, Yorkshire. She married George William Baldwin, a branch manager of a mantle and costume manufacturer (1911), in 1902.