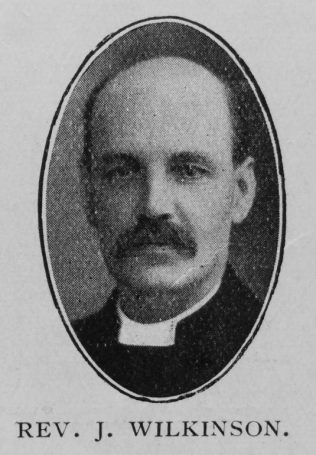 Transcription of obituary published in the Primitive Methodist Magazine by J.D.T.

It is never very easy to describe a man in a word, so much spills over the utmost content of that word, however choice and expressive it may be. But perhaps the one word which comes nearest to giving due account of my friend John Wilkinson is that he was a man of grit. The limestone of his native north was in his make-up; both physically and spiritually. Born on the borders of Northumberland and Cumberland, he carried to the end the strength and enduringness of his ancestry and place of origin. I recollect him first as a young fellow of some eighteen years of age, when for two or three years in succession I went to his native circuit as missionary deputation, and used to hear his superintendents speaking of him as an ardent, plodding student.

From his earliest days in our ministry, which he entered in 1879, he was recognised as a man of outstanding personality. He was never a copy or an echo; he thought for himself and he said his say. He followed his own convictions, which were slowly formed and tenaciously held. He had many of the qualities of original leadership. He was a forceful preacher, an admirable sermon builder, as the volume of sermons he published not so long ago clearly evidences. He was logical, strong, sound and safe, not brilliant but impressive, slow in manner but moving steadily on to his destined mark. He spent great pains over his preparations, never slurring what he regarded as his chief work of preaching.

In administration he was equally careful, methodical and painstaking. He held various secretaryships with the full confidence of his brethren in his general soundness of judgment and tactfulness. He was an intensely devoted worker, never sparing himself, and in several of his circuits wrestled successfully with critical financial situations, and even outside the boundaries of his own station, notably in Bristol. When I spent a few days with him last February in that city he was talking eagerly of what he hoped to do in Sheffield. Difficulties were to him a challenge; obstacles were stepping-stones. He never calculated on being beaten.

He was closely associated with what is known as the Holiness Movement, both within and without our Church, and gave it most intelligent advocacy both by voice and pen. His life, too, commended his professions. There is, concerning the dead, a rule of nil nisi bonum, which is, however, to my mind, often better honoured in the breach than in the observance. Some might think John Wilkinson hard, and he could be hard. That was the defect of his quality of executive will. There was a sort of uncompromisingness about him, which sometimes had to be reasoned with and generally yielded to reason. He was a hard hitter and a hard hater, but on principle, never on merely personal grounds.

In the old days he would have made a good stern Covenanter. But there again, in another way, he resembled his native north, where among those rugged hills and moors, with their outcroppings of hidden limestone and granite, you will often come upon sweet wild flowers peeping out in unexpected places and softening the stern aspect of the wild. In his family relations and in his more familiar friendships he was sweet and tender to a degree. He was manly to the last.

His strong will, in the strength of its inspiration by the gospel, conquered death. He was only fifty-five years of age, and his ministry lacked at least five years of the general average of forty, but it could hardly be said that he died prematurely, for he filled the years of his service to the very full. He bore his somewhat prolonged and painful illness with great fortitude and calm of spirit. He met the last enemy without a tremor except for those he loved. He died on November 11th, and was interred on the 15th.

John was born in 1858 at Swinhope, Allendale, Northumberland, to parents William, a coal miner, and Ann.

Before entering the ministry John worked as a coal miner (1871).

He married Isabella Marshall in the spring of 1883 at Sunderland, Co. Durham. Census returns identify one child.