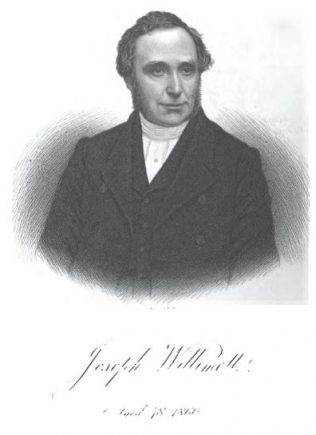 Joseph was born on 24 February 1812 in Sedgford, Norfolk. His family name was Willamon, his father’s family originally coming from Bremen in Germany.  His family were Wesleyan Methodists. Joseph changed his name to Willamite and later Willamott.

He was apprenticed as a boot and shoe maker in his own village. After completion of his apprenticeship, he moved to Kings Lynn. There he heard the preaching of John Smith and became a Primitive Methodist. He is shown on an 1833 plan as an exhorter and continued as a Local Preacher until 1835 when he started to travel.

Joseph’s obituary records the following episode from his ministry.

In the year of 1849 he was stationed in Cornwall and was wonderfully preserved by a gracious Providence in the midst of disease and death; in a small fishing place called Mavagissey the cholera raged to a fearful extent; the black flag was hoisted in some streets warning the public not to enter. Mr Willamott says he saw men on their knees in the street begging for mercy; some of the people went to live in barns, and stables, and fishing boats; strong men and women smitten down, dead and buried in ten or twelve hours; and many that could left the town, but Mr Willamott kept at his work of Mercy, preaching and visiting and God preserved him from harm.

Joseph was superannuated in 1874 suffering from heart disease.

Joseph married his wife Mary in 1844. She died in 1883. Census records do not identify any children.