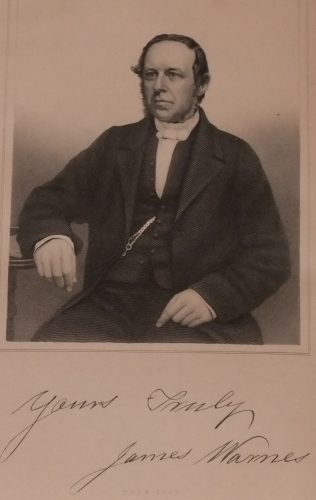 In 1828, James attended an open air service where John Oscroft was the preacher. Following this, he started to attend the PM services, but he did not have his conversion experience until 1830. In 1834, he went on the plan and also took the role of class leader.

In 1840, James led a team of three to mission St Albans and surrounding areas.

Patterson records that there was another revival in Brough in 1863-4, when James Warnes was there, and the whole circuit was stimulated to a remarkable extent.

The net increase on his stations during his itinerant ministry was 1179.

He was equally efficient in whatever he set his hand unto; he did not exhaust his energy in the study and pulpit, but would rally a prayer meeting in real old primitive fashion, and push the battle to the gate. He was equally at home on the platform; he could rouse a Westmorland audience to a pitch of red-hot enthusiasm, and there are many people that are easier to move than Dalesmen.