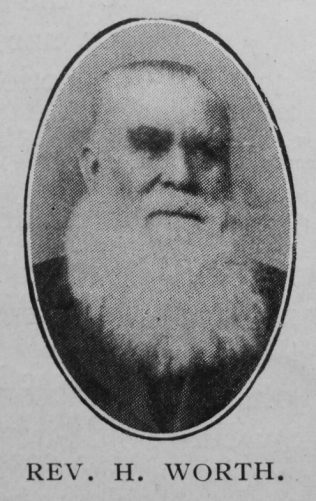 After a journey lasting nearly eighty years, Rev. Henry Worth entered upon the eternal rest on March 6th, 1915. His death removes from the plan of the Leeds Fifth Circuit a name that has had the second place thereon for many years, and from our midst a venerable and genial personality.

He was born on October 1st, 1835. He came of a godly ancestry. His father was a Primitive Methodist local preacher, and his grandfather was on the Wesleyan “plan.” From early boyhood his thoughts and ambitions were turned toward the ministry, and the way opened in 1858 when he was sent from his employment as a worsted spinner in Leeds to take charge of a church in Penzance.

The period of his active ministry covered twenty-seven years, during which he laboured successively at St. Day, Hereford, Tredegar, St. Austell, Great Yarmouth, King’s Lynn, Cambridge, Howden, Brigg, Barton-on-Humber, Doncaster, and Staveley. An affliction, from which he never fully recovered, compelled his superannuation in 1886, and he settled at Doncaster, but he was subsequently able to render valuable service to churches in Lincoln, Wishaw, Shipley and Leeds.

In the early days, when our people were poor and salaries were small, and the conditions of life in our ministry demanded great sacrifice, heroism and power of endurance, Mr. Worth endured much hardness. Many of his fellow-workers have paid some fine tributes to his devout life, laying emphasis upon the pastoral side of his work, and he is remembered specially in East Anglia as a fervent and successful evangelist. As we have known him in his later years, the ruling passion was strong in him. He was very loyal to the ideals of his early days, took a deep interest in the work of the local churches and in all Connexional movements, diligent in his attendance at the religious services, and delighting in the companionship of his brethren in the ministry.

He died as he had lived, strong in the faith, confident in the truth and saving power of the gospel he had preached. He knew whom he had believed, and spoke naturally and expectantly about the beyond. Many thank God for his work and witness. The funeral service was held in the Eleven Lane Ends Chapel, where he had worshipped regularly for many years. An address reviewing the life-work of the deceased was given by Rev. W.R. Fallas; and Revs. W. Huffington, representing the General Committee, E. Barrett, representing the Leeds District Committee, W.A.R. Collins, a nephew, and T. Jackson, of London, also took part. The remains were interred in the Baptist Cemetery, Bramley. Rev. E.W. Pape read the committal, and Rev. W.S. Spenser offered prayer. A memorial service was held in Moriah Chapel the following Sunday evening, conducted by Rev. E.W. Pape.