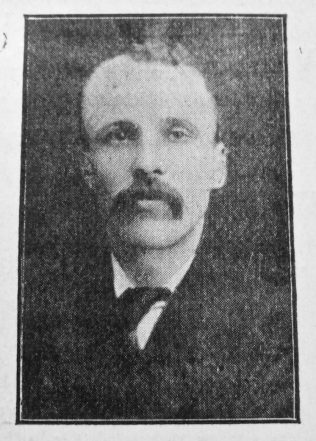 Transcription of Obituary in the Primitive Methodist Magazine by R.H.

The Rev. Robert Wheeler, whose death occurred at Rothwell, near Leeds, on Nov. 7th, 1904, was one of a family singularly gifted, and all of them distinguished for their devotion and service to the Primitive Methodist Church. He was born at Durham, November 8th, 1862, and his father and mother being Primitive Methodists he was associated with our church in the old cathedral city from his infancy until he went to Manchester College to prepare for the ministry. The family consisted of five sons, all of whom are prominently connected with our Church.

Robert was a day short of having completed his forty-second year when he died, but although his sudden and unexpected death is a heavy loss to the Church, he had already fulfilled a ministry very useful and much valued by the churches. How highly that ministry was appreciated by a wide circle of people, including not only members of the Church and ordinary hearers of the Word, but also persons of thoughtful and studious habits who had been sorely pressed by doubt and unbelief whose burden he had lightened, a pile of letters now lying before the writer of this memoir written to the bereaved friends since his death amply testify.

When he was still very young, under the ministry of the Rev. William Welford,  along with a number of others of about the same age, he surrendered his life to the service of Jesus Christ. This occurred at a service held in the Jubilee Chapel, Durham, with which the family had been associated for a long period of years. But before this crowning event of his life he had borne a stainless reputation, and to-day, not the least precious memory cherished of him by his friends is that no suspicion of unworthiness in word or behaviour was ever breathed against his fair name. As a youth at home, in the theological institute, and later as a minister of Jesus Christ, as all who knew him can testify, he bore himself like a Christian gentleman. After his conversion he began to work in the Sunday School, in the prayer meeting and the mission, service which even then, at the beginning of his Christian experience, bore fruit.

There was real grit in him also – the stuff that enables a man to live the strenuous life – the material without which no man can hope to succeed in the Primitive Methodist ministry. But a lad who, as he did, could rise from bed at four in the morning, not once or twice, but regularly, that he might devote two hours to his books before going to his employment at six, makes success inevitable. Only one capable of such self-denial and application could have revealed the ripeness of thought and experience which marked his sermons at the early age when his name appeared on the plan as a local preacher.

Not that he had then attained to maturity. Far otherwise, his manhood was of the sturdy oak-like sort that does not reach its growth till well on into middle life. Through all the years of his life he was gradually coming to his own, and it may be said with truth that he continued to grow up to the day of his death, not only morally and religiously, but intellectually also. A very marked advance in the man was apparent in the last year or two of his life. In that period he acquired the confidence in himself that is so necessary to effective work, and which ultimately comes to every man of real ability. That it came so late to a man so able as Robert Wheeler is accounted for by his extreme modesty, a modesty that amounted to shyness.

It is not necessary to set down in detail the special results of his work on each of the stations on which he travelled, though there is abundant evidence of the high value placed upon his ministry in all of them. There was a boldness about some of his plans which looked at in connection with his extreme modesty, bears strong witness to his heroism of spirit and his striking moral courage. When he reached the station on which he died, Rothvvell, he laid out for himself a magnificent scheme for aggressive work. A new neighbourhood had sprung into existence, and in this place he resolved that at any cost a Primitive Methodist Church must be established. Before he was stricken down he and his wife had visited 180 families in this locality. He had also established a society class the leading of which was his very last religious service, and had he lived there can be little doubt that he would have made this mission a success. As for his preaching it continued to improve to the end of his days, growing in effectiveness with the growth of his manhood. His sermons were always marked by originality in conception, profound insight into the bearings of the truth on the practical life of men, and thorough preparation.

He has been taken from us in the very strength of his manhood, and our church loses heavily by the sad event. We mourn on this account, and much more do we mourn for the loss the event means to his family. As the life-partner to a minister his gifted and devoted wife found a sphere for her activities in which all toil and sacrifice were a joy, for she was singularly well fitted to help her husband in his work, and experienced a real pleasure in doing so. In their home there was perfect domestic bliss-bliss springing from absolute agreement in taste, in ambition and aim. Two lives consecrated to God were as one life. For the present this is spoiled by death’s cruel hand. There must now be lonely hours, a certain narrowing of the sphere of work for the widow, and for the children a loss that is irreparable. But only for a little while, till the day dawns and the shadows flee away.

A memorial service was held at Rothwell at which were present Revs. M.P. Davison, A.T. Guttery, J. Harries (Wesleyan), W.R. Fallas, G. Chun, and G. Ayre, and the remains were interred in St. Margaret’s Churchyard, Durham, within sight of the home of his childhood. At the graveside were Revs. R. Hind, J. Hall (sent to represent Gainsborough circuit), W. Barton, E. Richardson, M.T. Pickering, G. Eldon, W. Cuthbert, and J. Williams, Mr. V. Coward representing, on behalf of the General Committee, his father, who was absent from home on business, Mr. J. Bell, ex-Vice-President of the Conference.

Robert was born at Durham, Co. Durham, to parents George, a woolsorter, and Ellen. Before entering the ministry, Robert worked as a joiner.

He married Elizabeth Jane Newcombe (1867-1933) in the summer of 1892 at Durham. Census returns identify two children.