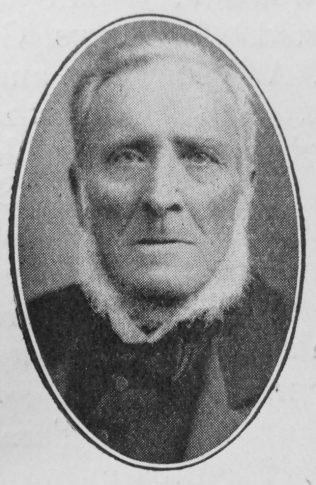 The Rev. William Watts passed over to the homeland, on October 30th, 1907. He had attained the ripe age of elghty-two years, having been born in 1825, at Little Tew, near Chipping Norton, Oxfordshire. Up to about the age of seventeen he had not many religious privileges. In his infancy our Leicester Circuit planted Primitive Methodism in Oxfordshire, taking Witney for its centre. Passing through much persecution it extended its operations to Chipping Norton and adjacent villages, when William Watts, then a youth in his teens,

“Heard the glad sound,
And liberty found,
Through the blood of the Lamb.”

After nine years’ fellowship with the people of God, and joyous service as a local preacher, he was called into the wider sphere of the itinerant ministry in 1851. Salisbury was his first circuit. After a ministry of fifty-six years it pleased God that he should yield up his charge where he began.

In addition to a clear realisation of his acceptance in the Beloved, he had a strong constitution and great powers of endurance of fatigue, in long journeys and labours more abundant.

Among the circuits in which he exercised his ministry were Camborne, St. Day, Wallingford, Lydney, Stroud, Ramsey, and St. Neots (Hunts), Newtown (Montgomery), Abergavenny, Marlborough, Spilsby, Leake, and Droxford. While on the last named his health failed, and he was compelled to superannuate in 1894.

After a short rest he rallied again, and it was his joy to render service for the Master as far as strength would permit, in St. Just, Swansea, Lichfield, and Bloxwich and Cannock circuits.

While serving his Saviour at Heath Hayes in Bloxwich station it seemed as if the end had come. But after many weeks of great prostration it was God’s good pleasure to restore his strength to such a degree as to enable him to remove to Alderbury, Salisbury, where for three years and four months he was under the tender and watchful care of his beloved daughter, Miss Ada Watts.

For hours before the call came his mind was moving in the old haunts, and loved vocation of a home missionary. It seemed to him (and it may be he was right) that some one had come from over the Border to bear him company, “in age and feebleness extreme,” and to this visitor he was recounting scenes from the three score and five years during which he had served the Saviour.

While thus in spirit fighting his battles over again the Lord of Life said, “It is enough.” And he departed to be with Christ, the end for which he had set out sixty-five years before.

“Immortal fragrance fills the circle wide,
And tells us whence his treasure was supplied.”

I have not been able to identify the name of William’s first wife from online records. can anyone point me in the right direction?

He married Elizabeth Chynoweth (b abt1843) in late 1868 at Truro, Cornwall. Census returns identify three children.