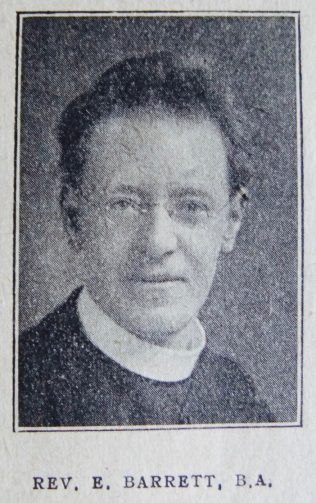 Ernest Barrett is a graduate in Arts with honours in philosophy and a specialist on Kant, but he is much more than that. He is a graduate of a wider university than Leeds, and having spent all his ministerial life as a Superintendent Minister of our Church, seventeen of his years on two circuits in the City of Leeds, the remainder on Erith and Belvedere and Ryde, he is a specialist on human nature as well. The grounding for this was laid in his ‘teens when engaged in the cotton industry in Oldham. Contact with operatives and travellers gave him an insight into the ways of the world that, although much of it was ugly and unsavoury, opened his eyes, and equipped him for the tasks that lay ahead.

Ernest  Barrett comes from the County Palatine. Born at Rochdale, he removed in his early ‘teens to Oldham, and was in at everything at the Bourne Street Church, Hollinwood. He entered Hartley College in 1897, and since leaving there, after probation at Erith, and a term on the Isle of Wight, Yorkshire claimed him, and Leeds has worked him hard. He did a fine work at Joseph Street, and his present circuit has a great record of financial successes, and for its contributions to missions and all Connexional Funds. Seventeen years in a great city gives a man of parts and energy a great opportunity, and Mr. Barrett has used his well. He has won recognition in all quarters, worthily representing our Church on many great occasions, serving as President of the City Free Church Council, and is now Chairman of the Armley Council for the sixth year in succession.

A B.A. degree, snaffled, so to speak, out of his spare time, is a big thing to have done. But the Rev. Ernest Barrett was always a close student, and he would take Kant in his stride. Some of his friends thought he should have made music his profession, others that he was marked out for a successful business career, but he chose to follow the gleam, and our Church is the richer for his ministry. His business capacity was proved by his work as District Secretary for five years, and as G.C.D. for the Leeds District. His preaching and speaking gifts are of a high order. He has always something to say and he says it well, and he has the happy faculty of using what he knows to the best advantage. He has travelled extensively in France, Switzerland and Italy, and this supplies many “windows” for his discourses and writings. Well endowed and equipped and thoroughly devoted, he will continue at Tunstall, whither he removes in 1923, the great work he has carried on in Leeds, and Tunstall will offer him as great an opportunity as any he has had in the past.

ERNEST BARRETT, M.A.: born in 1872. Something of the breezy freshness of the slopes of the Pennines, where his family was cradled, clung to him throughout his remarkable career, though his actual associations in childhood and youth were with the Bourne Street Primitive Methodist Church in Oldham. In 1896 he entered Hartley College, where he came under the moulding influence of Dr. A. S. Peake. Diligent, resourceful, and possessed of a lively wit and irrepressible cheerfulness, he was sent from college to take charge as probationer superintendent of the Erith and Belvedere circuit. He had the unusual experience of serving throughout his long ministry of forty-three years as superintendent in all his circuits. After a term of three years at Ryde and Ventnor, he spent seventeen years of crowded and successful work in Leeds before going to the Mother Church of Primitive Methodism at Tunstall. At the zenith of his powers, he rejoiced in all his labours, and he always cherished happy memories of these years. After a further term in Leicester he became Book Steward in 1931, and when he relinquished that office in 1934 he took charge of the Ilford circuit, becoming Chairman of the London North-East District in 1937. During the war years he took charge of the London German Church in addition to his other duties, and was able to maintain to the end of his life a wonderful enthusiasm for the wide interests he had cultivated. His honours degree in philosophy was secured during the years of his ministry in Leeds, where he not only maintained his pulpit, but took a responsible share in the wider affairs of the District. He loved music, and served on the committee which produced the Methodist Hymn-book. Even in his retirement, in spite of a period of severe illness, he enjoyed to the last his frequent preaching appointments, and kept up a lively correspondence with a wide circle of friends. He possessed a mind of unusual vigour, a disposition of unquenchable good humour, and a zeal for the bringing of souls to God. He died on 12th September 1955, in the eighty-third year of his age and the fifty-seventh of his ministry.

Ernest was born in 1872 at Rochdale, Lancashire, to parents James and Betty. James was a hot water engineer in 1881.

Before entering the ministry, Ernest worked in a cotton mill.

Ernest married Betsy Vickers (abt1869-1944) in the summer of 1903 at Oldham, Lancashire. Census returns identify one child.

Book Steward (347 KB Adobe Acrobat document, opens in a new window)
Transcription of article in the Primitive Methodist Magazine 1931 on his appointment as Book Steward.