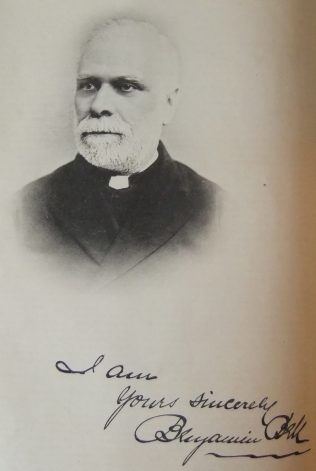 Benjamin was born on 23 November 1839 at Great Yarmouth, Norfolk to parents George and Mary.

On 15 March 1859 Benjamin gave himself to God. He immediately started to teach in Sunday School and three months later his name was on the plan. Within 12 months of conversion, Benjamin was called to minister in Ipswich. The following year, 1861, he was pledged by the Ipswich circuit.

The 1893 biographical sketch in the Primitive Methodist Magazine records that his great aim was to be a plain, useful, Primitive Methodist Minister. He was mainly a preacher of the Gospel.  He delighted in preaching. The popular platform had little or no attraction to him. Benjamin was most at home in dealing with the great truths and themes of the Bible.

Benjamin’s natural disposition was somewhat retiring; he never thrust himself to the front; yet he lacked not the courage and outspokenness when occasion required.

Benjamin had something of wit, was good at repartee and was not altogether destitute of sarcasm. His make up was of too practical a kind to have much appreciation of the poetical.

Whilst in the Norwich District, Benjamin was Secretary of the Equalisation Fund for some time and in the Leeds District he served as Secretary to the Sunday School Committee for three years.

His obituary records that as a colleague he was brotherly, and as a pastor genial and kind.