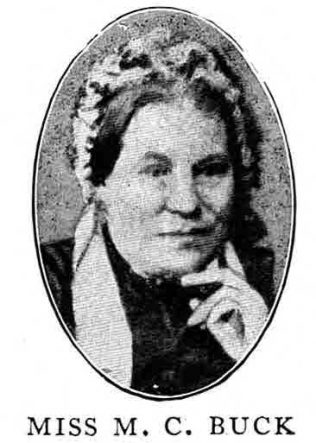 Mary Clarissa Buck was born on the 5th of January 1810 and followed Elizabeth Evans, immortalised as Dinah Morris by George Elliot, to be the second famous woman preacher to be born in the tiny Leicestershire village of Newbold. We are told her parents, William and Mary, were hard working though poor. In 1818, Ashby and the adjoining area, including Coleorton, were visited by Primitive Methodist missionaries as a result of which William and Mary opened their house there for services and provided accommodation for visiting preachers both itinerant and local. Services continued to take place there until the first Primitive Methodist chapel was opened in Coleorton some 21 years later.

Although in constant contact with the Primitive Methodist preachers, it was not until she was 20 that Mary came to know her Lord and accept Him as her Saviour when she was converted, not in a Primitive Methodist service or at a camp meeting, but at the celebrated annual lovefeast held on Easter Monday 1830 in the Wesleyan Methodist chapel at Griffydam. Perhaps she was invited to go there by a friend, perhaps she went out of curiosity but, in fact, we shall never know the reason for her going to Griffydam that day.

Following her conversion she joined the small Primitive Methodist Society at Coleorton where it was soon discovered that she had the gift of preaching. She had gone with her sister, Jane, on her preaching appointment at a small cottage in Lount where the Primitive Methodist society met and she was persuaded by her sister to speak which she did with some effect since, at the Ashby quarterly meeting in March 1831, her name was added to the preachers’ plan as an exhorter. Later she became a local preacher and walked miles to take services. Even in her early days as a preacher she would attract large congregations.

She was somewhat large in physique being described as built on ample lines. Her appearance though was equally matched by her intellect which was not less impressive than her physical. A few other Primitive Methodist women preachers were distinctive in another way as they were particularly tall for the time. However, there was an aspect in which all of them would be similar and that was in the nature of their attire. The Primitive Methodist Conference had laid down that our female preachers be patterns of plainness in all their dress which was interpreted as requiring the wearing of a black dress and white bonnet with matching tabs. If it was felt that any of them had broken the strict dress code then they would be subject to censure.

In 1847 she retired from active ministry so that she could serve in a wider circuit and, thereafter, travelled the length and breadth of the country to preach at chapel openings, anniversaries and other special services. Such was the power and eloquence of her preaching that often chapels were so crowded by those wishing to hear her that many could not get in. Not only would all the seats be crammed with people but also the aisles and even the steps to the pulpit would have people on them! According to one writer, she was one of the most popular of all our women preachers.

Eventually, the wear and tear of 12 years as a travelling preacher and 25 years of crisscrossing the country to preach took its toll. In 1872 she suffered a severe stroke and was then confined to her room until she died on the 19th of July 1876 aged 66. She had made Leicester her home and is buried in the cemetery there.