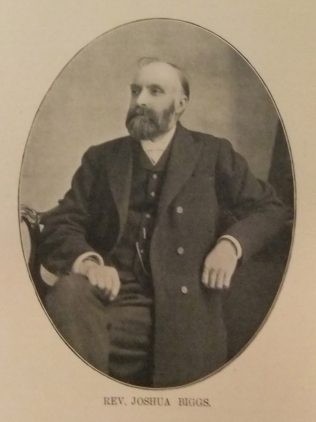 Joshua was born on 19 July 1848 at Stoke St Milborough, nr Ludlow, Shropshire to parents Thomas and Sarah. Both of his parents were local preachers. Thomas was a shoemaker.

Joshua was converted in his teens, an event triggered by words from Rev Charles Smallman. He was briefly engaged as a hired local preacher in his own circuit. This was followed by a similar position in the Dawley circuit for fifteen months before entering the ministry.

During his superintendency, new chapels were erected at The Cefn, The Hope, Moston, Butler’s Bank, Mainstone (new school), St Leonards, Shoeburyness and Darsham (new school). At Wrentham the chapel was entirely reconstructed.

As a preacher, Joshua belonged to the evangelical school, preaching a full, free, and present salvation; his sermons were carefully prepared and forcefully delivered.

Joshua married Jane Lambert (1843-1931) in late 1876 in the Madeley Registration District, Shropshire. Jane was a local preacher. They had one daughter.