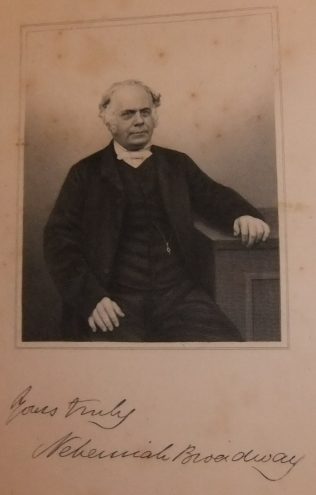 Nehemiah was born on 5 July 1816 at Motcombe, Dorset to parents William and Ann, who attended the established church. He was baptised on 11 August 1816 at Motcombe. William’s occupation is recorded as a clerk. Nehemiah was converted in 1836 when William Paddison was superintendent of the Motcombe circuit.

Petty records the significant progress made on the Canterbury Mission in 1850/52, where membership increased from 128 to 215.

When looking at Nehemiah’s stations, at first view he doesn’t appear to have stayed for very long in each place. However, his obituary reveals that when labouring under the direction of the General Missionary Committee, he was looked upon as being pre-eminently suited to heal a wounded cause, or make up a connexional breach.

Nehemiah died on suddenly on 3 September 1876 at Abergavenny, Monmouthshire. He was awaiting a train to take him home from a camp meeting held at Crosswelydd.

J Petty, The History of the Primitive Methodist Connexion, 1880, p518