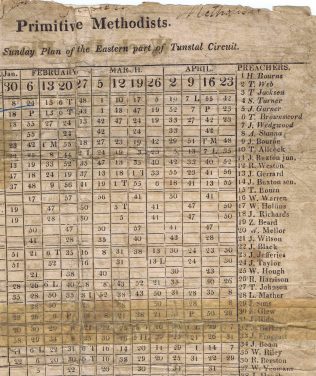 zoom
Section of Preaching Plan for Jan-Apr 1820, showing Thomas Brownsword as No. 6, replacing Thomas Woodnorth who was No. 6 on the previous Plan

Thomas was the son of a small farmer and innkeeper at Gorsty Hill. He was born on 21 August 1801, and his parents, George and Elizabeth Brownsword, were ‘respectable and moral people’.[i] Thomas  was ‘of a kind and gentle disposition’, and roamed the fields and woods around Englesea Brook.

In 1811, the Primitive Methodists opened a preaching house at Englesea Brook. This was in the home of Sarah Smith, a farm labourer’s wife, who had invited Thomas Woodnorth to preach in her cottage. George and Elizabeth Brownsword began to attend the preaching services, which were held at 2.00 on a Sunday afternoon, and Thomas sometimes went with his parents. He later ‘frequently spoke with great deference’ of hearing some of the great early preachers, such as William Clowes, Hugh Bourne, James Nixon and Thomas Woodnorth.

In 1818, a ‘gracious revival of the work of God broke out at Englesea Brook’, and many young people were converted and joined the society. Among them were Thomas Brownsword, and two of his sisters, Ann and Sarah. ‘One Sabbath morning’ he said, ‘the preachers came singing through the village, “We are going home to glory”, and “I’m glad I ever saw the day”.’ He was attracted and the following Wednesday went to a prayer meeting. ‘While the friends were directing him to “behold the Lamb of God which taketh away the sin of the world”, he was enabled to believe, to venture his all on Jesus. “His chains fell off, he lost his load, He rose, went forth, and walked with God”.’

About 4 months after his conversion he was put on the plan as an Exhorter. ‘Being inexperienced in the discharge of the important duties devolving upon him in this, his new sphere, he sought and obtained the mature and excellent advice of James Clifton, a local preacher. He also gave himself to prayer and the study of the Holy Scriptures. His progress soon became manifest; his abilities as a preacher and his youth (being only 17 years of age) attracted large congregations, and many souls were brought to God.’

On 29 October 1819, Thomas Bateman records in his journal how he was deeply affected by hearing the young Thomas Brownsword preach. He was ‘a boy, comparatively. However I heard him with profit. But I felt terribly ashamed of myself. I believe I am 20 years old this day; and for what purpose have I lived? What good have I done? I have purposed much and I fear have done but very little. I still feel as bashful and timid as ever.’

His call to ministry

Soon after this, Thomas Woodnorth, an itinerant minister in the Burland circuit, became ill and unable to continue his work. He was only 31, but knew his days were numbered, and wanted to get back to his home.[ii]  So he asked Mr Darlington, of Burland Green, to let his son take him on horseback as far as Englesea Brook, and bring back someone who could take over his work.  Thomas Brownsword, just 18 years old, was the person he had chosen.  Brownsword was at work in the fields, but as soon as Darlington delivered his message, he threw down his sickle, called at home to change his clothes, mounted behind young Darlington, and set off to take over Thomas Woodnorth’s ministry in the Burland circuit.  This was the start of a very successful ministry, in the Burland, Darlaston and Shrewsbury circuits.

Extracts from his Journal

Extracts from Thomas Brownsword’s journal, published in the Primitive Methodist Magazine, give a flavour of his work:

25 Nov 1819: ‘Preached in Bottley Hill; three joined the society. They are going on well; God is reviving his work among them.’

11 Dec 1819: ‘After visiting from house to house, preached at Frodsham to a large congregation. One soul was set at liberty, and the people are much alive to God.’

30 Jan 1820: ‘At 2.30 preached at Macclesfield. The room was crowded; two souls were convinced of sin, and after some time had been spent in prayer they rose up and began to rejoice in a sin-pardoning God. At six in the evening I preached again. The room was very full, and I was informed many could not get in. The presence of God made the place like a paradise. Believers were rejoicing; sinners began to fear and tremble, and they cried out for mercy; two or three souls were converted to God.’

29 Feb 1820: ‘I went from Weston to Mercaston; preached to a crowded house. The power of God was felt; three or four souls were convinced of the error of their ways; two of them trembled till they could not stand, and one fell to the floor.’

In May 1820, Thomas Brownsword ‘laboured with great success’ in Darlaston, Wednesbury and the locality, ‘often preaching in the open air to congregations supposed to contain 1,000 persons, and frequently witnessing the conversion of many sinners.’

A Prisoner for Christ

On Sunday 2 July, Thomas Brownsword went with some others from the Darlaston circuit to Stourbridge, where they preached in the afternoon in the open air, attracting a large crowd. At 6.00pm, Thomas ‘stood up to preach’ at the top of the town. A crowd of about 1,000 people gathered to hear him, but after a short while, a police constable arrived to arrest him.  One of the others got up to preach, and was also arrested, as was a third. The next day they were taken before the magistrate, and as they refused to promise not to preach in the open air, they were committed to the county gaol in Worcester. Here the three of them ‘exerted themselves for the good of the prisoners generally, preaching or exhorting them every night, and a great reformation soon appeared among them, and many who had been accustomed to curse and swear began to read and pray.’

The imprisonment caused great excitement. ‘Throughout Darlaston circuit and a great part of Tunstall circuit, prayer was made without ceasing to God for help, and he raised up friends on every side; kindness flowed from every quarter; ministers of other communities came forward to assist; voluntary contributions came in liberally. Tunstall circuit also pledged its aid, and due preparations were made to meet the expected trial.’

But as the preachers had broken no laws, those who had ordered them to be arrested decided against bringing the case to trial, probably to avoid exciting further support for the prisoners. On 11 July, Thomas and the others preachers were taken from the prison to Shire Hall, and released. That evening they decided to hold a meeting on the race ground at Worcester. A huge crowd gathered, both supporters, and those drawn out of curiosity to see and hear those who had been put in prison for preaching the gospel. It was a great mission opportunity. ‘Hundreds were melted to tears; deep religious impressions were made on many minds, and the apparently untoward event became the means of introducing the Primitive Methodists into this beautiful city.’

After his prison experience, Thomas returned to his mission in Darlaston, Wednesbury and Bilston, and on Sunday 6 August he preached at Dudley, where ‘one or two backsliders were restored, and many others were seeking the Lord, and at the close of the service he formed a society of eight members.’

On 18 March 1821, ‘Brother B missioned Chester, preached at 8 o’clock on the cross to about 500 people, and many seemed much affected. He then held a prayer meeting. Many were in distress and some obtained pardon.’

James Belcher said that he had heard Thomas Brownsword talk many times about his imprisonment at Worcester to large audiences, ‘who listened to the recital with great interest.’

In 1825, when Thomas had moved from Darlaston to the Shrewsbury circuit, ‘difficulties over which he had no control induced him to resign the itinerancy, very much against the wishes of Messrs Bourne, Nixon and Steele.  He then came to reside at Wednesbury, in the Darlaston station, and his name was put upon the plan as a local preacher.’

His ‘difficulties’ may have been to do with a woman. On 10 July 1825, in Walsall, Thomas married Mary Burgess.  On 12 February 1826, their daughter Elizabeth was baptised in Wednesbury. Despite having six children,[iii] it seems as if it may not have been a happy marriage, as James Belcher writes in his obituary, ‘our respected brother received persecution not from the world only, but from his own household.’

A Preacher for 48 years

Thomas and Mary set up home in Church Hill, Wednesbury, and he became an iron moulder, in the ironworks, a far cry from his childhood in the fields of Englesea Brook, or life as an itinerant minister, but he remained a popular preacher for over 48 years. ‘He was punctual in attending to all his appointments, evangelical in doctrine, warm in his manner, free in his conversation, impressive in his style; his mind was stored with useful knowledge, so that he was heard in general with much pleasure, and his services were in great request in the surrounding circuits.’

Thomas was also a class leader, and active in the life of the church.  He died after a short illness, from bronchitis, on 11 October 1867, aged 66. His wife Mary had died in 1862, and his eldest daughter Elizabeth in 1863, aged 38, leaving two small children. ‘A large number of ministers and friends attended his funeral’, and the length of his obituary in the Primitive Methodist Magazine was a fitting tribute to someone of whom Kendall was later to write, ‘Thomas Brownsword and his sister are figures that scarcely stand out in such relief as they deserve to do.’  Thomas’s sister, Ann Brownsword, became one of the first women itinerant ministers in 1819, until her marriage in 1821, when she too reverted to being a local preacher.