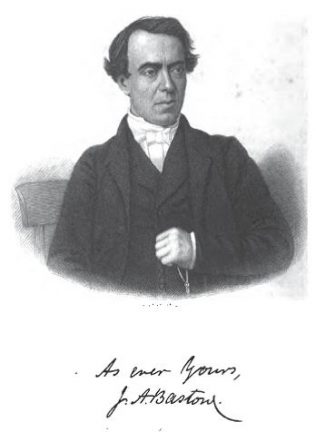 James was born in 1810 at Hunslet, Yorkshire, the eldest child of John Bastow, a weaver, and Mary Wade. As a youth he attended a Primitive Methodist church in Leeds, where he was converted and soon began to work as a lay preacher.

Ritson describes James as a ‘brilliant preacher and a ripe scholar’.

The Batley Road society (between Batley and Heckmondwike) was established by 1844 – 1845, using James Bruce’s house at White Lee. The impetus for the establishment of this society was the preaching  work of Rev James Austin Bastow in Spen Valley in 1844. It took over from the New Connexion chapel at Heckmondwike Top circa 1848 – 1849 and a new chapel was built at the corner of White Lee Road and Batley Road between 1868 – 1869.

James published a Bible Dictionary in three volumes. At the time it was seen as a comprehensive digest of the history and antiquities of the Hebrews and neighbouring nations.

James became a member of the Syro-Egyptian Society (established in December 1844) whose purpose was ‘to encourage and advance literature, science and the arts in Egypt, Nubia, Abyssinia, Arabia, Palestine, Syria, Mesopotamia, and Asia Minor