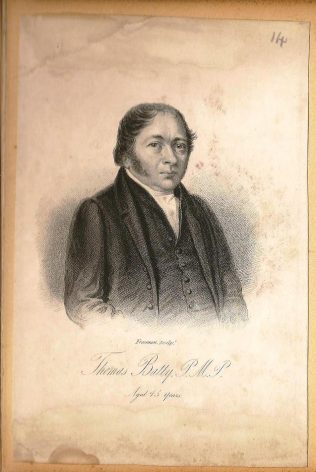 Thomas was born on 31 August 1790 at Mappleton, Derbyshire, the seventh of eight children of William Batty and Ann Watt. William was a blacksmith. Thomas served several years in the navy having been on the disastrous Walcheren expedition of 1809, and had a narrow escape at the siege of Flushing. He was converted through reading a bible given to him by an agent of the British and Foreign Bible Society. In 1813, Thomas returned home and associated himself with the Wesleyans, becoming a local preacher.

Thomas attended and preached at a Camp Meeting, near Driffield. The Wesleyans required him to cease attending such meetings or face expulsion. He chose to join with the Primitive Methodists and in 1821 became a PM Missionary on one of the Hull branches.

Initially he went to Keighley and Bingley in the summer of 1821 and was successful through street preaching in gathering a settled congregation. On 16 September 1821, Thomas conducted the first PM Lovefeast in a large wool warehouse in Keighley. Just after the service had concluded the floor gave way with a tremendous crash. The building was three storeys high and the meeting was held in one of the upper rooms. Sixty persons were injured and one woman died. It might have been expected that this would be a setback to the cause, but increased earnestness added new converts.

Thomas is best known as ‘The Apostle of Weardale’.  He was transferred from the Silsden Branch to Barnard Castle in 1822 and began to mission in Weardale. Initially he found the people slow to respond. He was encouraged at Westgate by Joseph Walton, a class leader, to persevere and eventually in March 1823 a revival began that extended to Nenthead, Alston, Allandale, Teesdale and the Eden Valley in Westmoreland. Within six months the membership of the Westgate circuit rose from 219 to 846.

He later went on to Brough where Kendall reports that he received considerable opposition to his ministry.

Batty continued as an itinerant minister until he superannuated in 1852 after which he remained settled in Dudley.

J Petty, Memoir of the life and labours of Thomas Batty, 1858