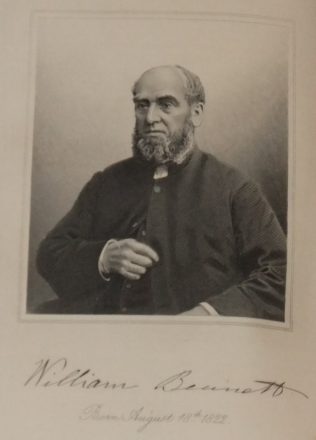 William was born on 18 August 1822 at East Leake, Nottinghamshire, the second son of Thomas and Lizzy. William’s mother was the sister of John, William and James Garner.

Family circumstances did not allow William to attend day school. He was sent out to work aged 9. He attended Sunday School and self-studied.

William was converted aged 17 through the efforts of his mother and older brother John, a local preacher. At the age of 22 he appeared on the plan of the Belper station.

William twice was a General Committee delegate from the Leeds District. He also spent 8 years as Secretary of the General Chapel Fund.

His obituary records that his sound judgement in business matters, his prudence in dealing with difficult cases, his tender regard for those overtaken in a fault, his faithful and straightforward conduct towards the habitually inconsistent, made him an able administrator and a good superintendent.

In pastoral work, he was eminently diligent, wise and useful. He never coveted the distinction of being a great preacher. His pulpit efforts were not learned, philosophical or rhetorical, but his style was plain and forceful, his teaching sound and Methodistic, and his matter experimental and practical.

His open air efforts were often mighty and led people to weep and shout for joy. With a well-knit frame, a good presence, a fine voice, an expressive face, a soul on fire, and rich unction, he frequently moved his audiences like forest fires before a strong wind.

William married Elizabeth Leng (1827-1917) in the summer of 1853 at Thirsk. William and Elizabeth had eleven children, three of whom died in infancy. Census returns identify the following.