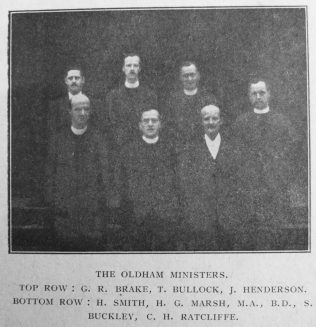 GEORGE ROBERT BRAKE: born at Odcombe, Somerset, in 1879. He entered the ministry in 1905, and was trained at Hartley College. His early hardships made study very difficult at first, and only stern self-discipline and long hours of toil enabled him, with the encouragement of his minister, to reach his goal. He began his ministry in the Docking circuit, and returned for a second term in 1920. His other circuits were Abertillery, Lydbrook, Oldham, Watton, Downham Market, Peterborough, and Swindon.

He did all his work with amazing energy, but of all his activities in circuit and district, the one which possessed him with an absorbing passion was preaching the Gospel; he lived for preaching, and he preached with great vigour the day before he died. Mention must be made of his concern for the property of Methodism; he believed that our buildings should be worthy of the message preached in them. After forty years in the ministry, he retired to Sheringham, and in the Cromer, Sheringham, and Holt circuit he rendered most valuable service, his crowning achievement being the building of the Willie Long Memorial Church at West Runton. He was suddenly called home on 25th October 1954, in his seventy-sixth year and the forty-ninth of his ministry.

George was born on 3 March 1879 at Odcombe, Yeovil, Somerset, to parents George, a baker, and Elizabeth.

In 1901 George was working as a grocer’s assistant.

He married Alice Elizabeth Thompson (1876-1940) in the summer of 1909 in the Tonbridge Registration District, Kent. Birth Records identify two children.

He married Mary Thompson in early 1954 in the North Walsham Registration District, Norfolk.