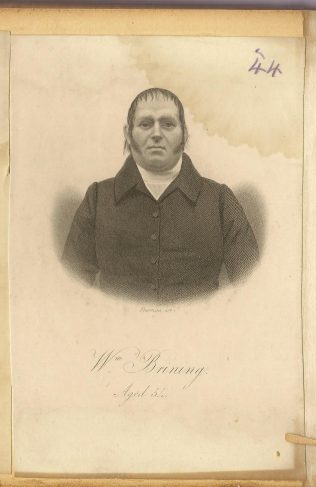 William was born on 26 March 1792 at Preston, Lancashire.

Before entering the ministry William worked as a weaver.

In relation to Preston in Holderness, Kendall records; ‘ The first chapel at Preston was built in 1822, at a cost of £200, and was capable of  seating 174 persons. For several years Preston, Burstwick, and Eimswell Chapels were a source of great anxiety, especially so as they were not originally Connexional chapels, but private property. The Hull Quarterly Meeting of 1827 directed that Brother William Brining “should get Preston and Rimswell Chapels painted without cost to the funds, or, if he painted them himself, paint should be found him.” During the course of its history Preston has sometimes been attached to Patrington, sometimes to Hull.’

Patterson records that at Hexham in 1841-2. William Brining was superintendent, and his colleagues included Christopher Hallam, Henry Yooll, and Colin C. McKechnie.