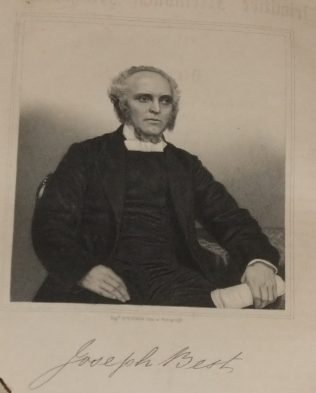 Joseph was born on 9 Jun 1813 at Durweston, Dorset to parents James and Ann. He was baptised on 25 June 1813 at Durweston. The baptism record identifies James Best as a labourer. Joseph was one of eleven children. In his teens, Joseph developed a considerable musical ability and he joined a band. This led him into company and a life of sin.

Joseph was converted at the age of 21 and immediately engaged in the work of distribution of tracts and visiting people in their homes. He was soon appointed a class leader and became a local preacher. On 12 January 1838 he left his native village to work as an itinerant preacher on the Weymouth mission.

The first part of his ministry was missionary in nature. He did real pioneer work, preaching the gospel in cottages, barns and in the open air, often ‘breaking up new ground’, and sometimes encountering violent opposition.

Joseph describes the situation in Cirencester in 1839-40. ‘Persecution has raged to an alarming extent at Cirencester during the last three months; the windows of our preaching room have been broken, the lights put out, and forms turned over, and the life of one of my colleagues has been in imminent danger. Such has been the violent conduct of the persecutors that the people have been afraid to come to our services. Yet these wicked men, when brought before the magistrates, have been encouraged in their proceedings, and their conduct even vindicated by …’

In 1846, Joseph went to St Ives as superintendent. This brought into exercise the tact, prudence and painstaking management which became the characteristics of him as a superintendent preacher.

As a preacher he was clear, forcible and practical. His sermons were well thought out and gave the impress of a refined and poetic taste. His mode of delivery was calm, simple and graceful.

J Petty, The History of the Primitive Methodist Connexion, 1880, p439