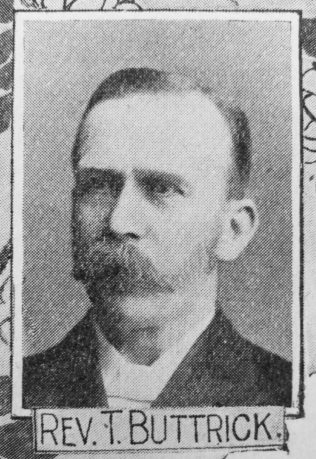 Tom BUTTRICK: born in 1861 at West Stockwith, Notts. At an early age he gave evidence of distinctive preaching gifts, and in 1881 he entered the Primitive Methodist Ministry after theological training in Sunderland. The versatility of his mind often surprised his friends, and he might have excelled in almost any profession. But the ministry to which he dedicated himself was his true sphere. In every one of his circuits he exercised a widespread and gracious influence, and is remembered with appreciation. Though a capable administrator, he loved preaching and was eminently fitted for the task. He was a keen student and had an orderly turn of mind. The efficiency of his pulpit ministrations was greatly enhanced by his faithfulness as a pastor. In 1924 he became a Supernumerary and took up his residence in Harrogate, where the Free Churches frequently availed themselves of the services of this powerful Methodist preacher. After a brief illness he passed away on January 6, 1941, in the eightieth year of his age and the sixtieth of his ministry.

Tom was born in 1861 at West Stockwith, Nottinghamshire, to parents George, a grocer, and Mary.