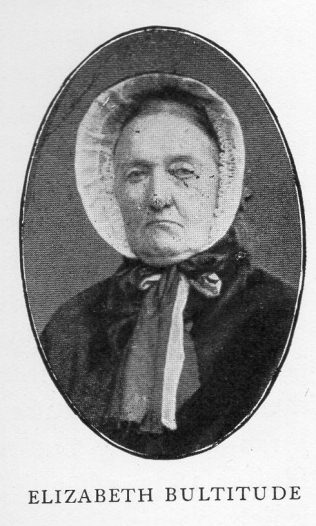 Elizabeth was born at Hardwick, Norfolk on 12 August 1809 into a family with Wesleyan Methodist links. Her conversion took place at a Camp Meeting held on Mousehold Heath, Norwich led by Samuel Atterby on 14 May 1826. Elizabeth didn’t actually join the Primitive Methodists until 1829. She was given a note to preach on 30 December 1830. She preached her trial sermon in Old Lakenham Chapel.

She responded to the call of the Norwich Circuit in 1832 and for 30 years conducted a strenuous ministry. Barber relates that: ‘She was a woman of large faith with a high sense of duty – a quaint and interesting personality whose life was a true commentary on the Gospel she preached.’

Ritson writes;’ Some idea of the endurance and devotion of Elizabeth Bultritude may be gathered from the fact that during her thirty years of ministry she only missed two appointments, one when there was flooding rain and the other a heavy thunderstorm. It is significant that these were out-door services, to which, under the circumstances, she did not deem it wise to go. She travelled thousands on thousands of miles, often preaching five and six times a week, three and sometimes five times on the Sabbath, and frequently visiting and praying with ten to forty families a day.’

Elizabeth was the last of the women itinerants in the Primitive Methodist Church. She retired to Norwich and died on 14 August 1890. The Conference of 1891 noted the disappearance of her name from the list of preachers where it had stood for so long ‘as though to remind us that the gifts of the Holy Spirit were without distinction of sex’

Elizabeth Bultitude: The Last of the Amazons (323 KB Adobe Acrobat document, opens in a new window)
Transcription of an article in the Christian Messenger 1916