An arduous, but fulfilling journey 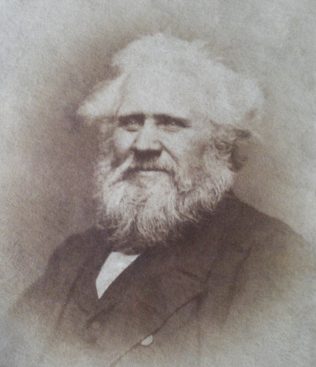 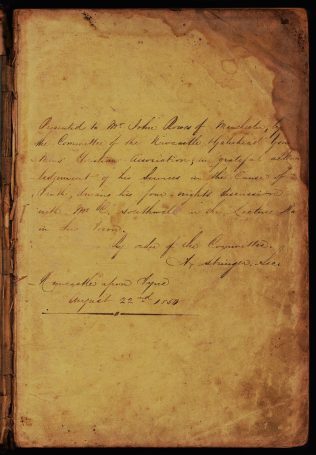 zoom
Bible (showing inscription) presented to John Bowes by the Newcastle and Gateshead YMCA on 22nd August 1850, after the public discussion held between himself and Charles Southwell.
Ian Bowes 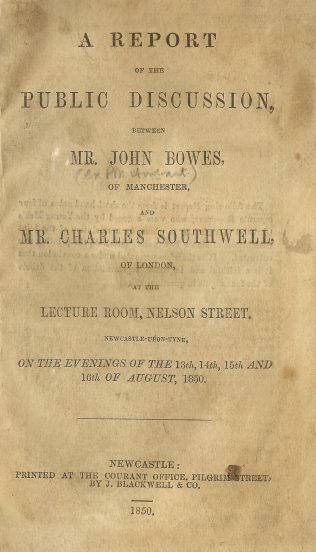 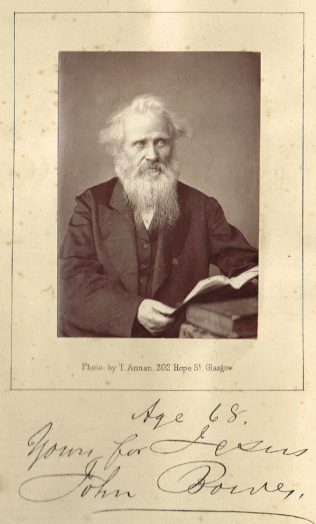 zoom
Frontispiece to The Autobiography or History of the Life of John Bowes, Glasgow, 1872
Stephen Hatcher

John Bowes, an English travelling preacher, was born at Swineside in Coverdale, parish of Coverham, Yorkshire, on 12 June, 1804. He was converted in 1817 (age 13), after reluctantly attending a sermon by a local Methodist preacher in Walls’ long room, Carlton, at the insistence of his father.

He started preaching locally, and was approved to join the Guisborough Circuit after a committee heard him preach a trial sermon at Middleham in 1822 (age 18). In 1823 he joined the Ripon Circuit, spending 2 years there before joining the Keighley Circuit in 1825. From his autobiography (page 33): “Great Revival in Keighley Circuit [The following mostly appeared in the ‘Primitive Methodist Magazine’ July, 1826. As this is my first appearance in print, I took some interest in it, and believe it was for the Lord’s glory, not mine.]” He then goes on to describe events from 5 November, 1825 to 12 March, 1826 which was submitted from his detailed journal.

He married Susannah Bellwood at Thorganby on 3 September, 1826. On 25 May, 1827 he set off for the Sunderland Circuit, arriving in Edinburgh on 7 July, 1827. An intricate sequence of events leading to a dispute that he refers to as the “Controversy with the Sunderland Committee” resulted in John Bowes leaving the Mission in April, 1829. Thereafter, he renounced all party appellations and on 20 April, 1831 started a new mission and was inducted to the pastoral charge of the first church of the Christian Mission in Dundee.

He subsequently left Dundee, becoming the pastor for Hope Street Chapel in Liverpool. He left Dundee with regret; 2000 people attended his open-air farewell sermon on 17 April, 1837. He travelled and preached often wherever a congregation was willing to listen, be it a chapel, a hall, a tent, a house, a fish-market or in the streets, in the ‘open-air’. For a large part of his life he was an itinerant minister and suffered many privations during his extensive travels through England, Scotland and Wales. He also visited Ireland, Canada and America.

He was prosecuted several times for street preaching. The following extracts from a letter he wrote to the magistrates of Dundee on 4 February, 1841 taken from his autobiography (page 267) gives a good perspective: “Twice you fined me, and threatened to imprison me forty days, if the fine should not be paid. What had I done, that ye persecuted me? Was it because seven years I preached out of doors to the poor perishing outcasts, that seldom or never go to any place of worship? Was it because when that awful disease, the ‘Cholera Morbus’, raged in your town, and laid prostate in the grave five hundred of your people, I visited the cellars and the garrets wherever my services were required; and even sometimes supplied the wants of dying bodies whom others deserted, and poured the light of truth into their immortal but departing spirits? Was it because I visited the sick for seven years together, undeterred by fevers and contagious disorders whenever I was called upon, trusting that God would either protect me or take me to heaven?”

He published many of his writings. Some of his works (including his autobiography) were printed by ‘Bowes Brothers Machine Printers’ in Dundee, which was owned by his sons. In 1839 (age 35), he gave up taking a salary for preaching, choosing instead to support himself and his family with the sales of his writings, as well as lecturing. Blessed with a powerful voice, he was a passionate speaker and was more than willing to engage with “Infidels” and hold public discussions with socialists, freethinkers, atheists, Mormons, Unitarians and Roman Catholics, amongst others.

He spoke out strongly against war and delivered a speech to that effect in the Free Trade Hall in Liverpool on 17 February, 1846. His peace initiatives led him to be one of the representatives of England at the Brussels Peace Congress on 20 & 21 September, 1848. In 1853 he wrote a letter to the Czar of Russia, admonishing him for his aggression at the start of the Crimean War.

“I have endeavored to be myself and not another; to please God, not man, and whatever good may have resulted from my life and varied labors, thus far, to Him only be all the glory.” –  John Bowes, Westfield House, Dundee – 1 January, 1872

John Bowes died at Dundee on 23 September, 1874 (age 70). He was interred at Dundee Western Cemetery.

John Bowes has his own Facebook page. You can visit it here.

‘Presented to Mr. John Bowes of Manchester, by the Committee of the Newcastle and Gateshead Young Mens’ Christian Association; in grateful acknowledgement of his Services in the Cause of Truth, during his four nights discussion with Mr. C Southwell in the Lecture Hall in this town.

By order of the Committee.  A. Stringer Sec.

The NEW TESTAMENT, translated from the Purest Greek (1870)

CHRISTIAN MISCELLANY AND THE HERALD OF UNION, 289 pages [includes A SERMON ON THE CAUSES AND CURE OF DRUNKENNESS, 20 pages and AN ADDRESS TO THE SPIRIT DEALERS OF SCOTLAND, 12 pages] (1831)

THE CHRISTIAN MAGAZINE, 4 vols, about 300 pages each

Six Lectures on THE ERRORS OF THE CHURCH OF ROME, 72 pages

Eight Lectures on THE SECOND COMING OF CHRIST, 140 pages

Republished, SWEDENBORGIANISM depicted in its true colors, by the late J.G. Pike, of Derby, 66 pages

WORKS ON MINISTRY, – BAPTISM, 24 pages each

‘All to be had from the Publisher, J. Bowes, Westfield House, Dundee’