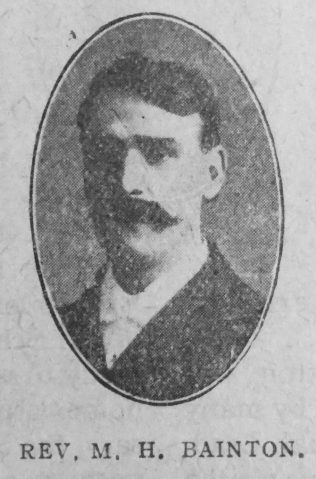 MATTHEW HENRY BAINTON: born at Brynmawr in 1881. For a time he worked in the mining industry, where his outstanding qualities were soon recognized. He turned from this to enter Hartley College in 1903. To the end of his days the wonder that he should have been called and chosen was with him still. After a period at Thetford, where he found his life partner, he served in the Oakham, Sutton-in-Ashfield, Staveley, Kimberley, Middleham, Leicester Ist, Hinckley (Albert Road), and Clay Cross circuits. During this period he filled several District offices with his usual quiet efficiency. He retired to Hinckley in 1948, where he continued to serve as long as he was able. In town or country chapel his preaching was always thoughtful and much appreciated. His dignified bearing, his clear emphatic speech, and his upright character were all evidence of a deeply devoted man. On first acquaintance he might have seemed austere to some, but to have contact with him was to respect him, whilst to know him was to love him. It was typical that his last visit was to comfort a widow in her affliction, and that he should try to pray even when words failed him. On his way home he stumbled and fell, which led to his last weeks in hospital. All through his life he read widely and deeply, including modern theology and philosophy. His New English Bible and Oman’s Conceming the Ministry were at his bedside to the last. He died on 31 December 1966, in the eight-fifth year of his age and the sixtieth of his ministry.

Matthew was born in 1881 at Brynmawr, Breconshire, to parents George and Esther. George was a coal miner.