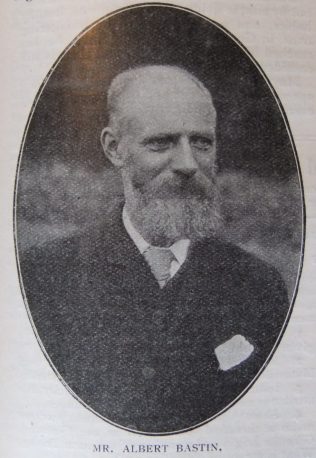 No man of my acquaintance is more worthy of a place in this gallery than the subject of this sketch, one of the most useful and honoured local preachers in the Plumstead Circuit.

Bro. Bastin was born in the year 1836, in the town of Basingstoke. Basingstoke, at that time, formed part of the Andover Circuit. His father was an acceptable local preacher on that plan, and took his full share of the appointments in that wide station, travelling far and wide to preach the unsearchable riches of Christ. One of Mr. Bastin’s earliest recollections is accompanying his father to Andover to hear the venerable Hugh Bourne preach in the Circuit Chapel. The founder of the Connexion preached that memorable Sunday morning from Matthew xiii., 4,3, “Then shall the righteous shine forth as the sun in the Kingdom of their Father.” At the close of the service the preacher noticed the lad, and placing hands upon his head breathed a benediction upon him.

When our friend was eleven years of age his parents left Hampshire and came to London, settling in Lewisham. There was then, as now, no Primitive Methodist cause in Lewisham, and no chapel nearer than Deptford; and it was to Deptford that Mr. Bastin, sen., took his local preacher’s credentials. The children, however, could not make the journey to Deptford, and for some years they attended the Congregational Church and school. It was probably owing to this circumstance that our friend was not led early in life to a decision for Christ, for it was not till the year 1873, when he was between thirty and forty years of age, that Albert Bastin found the Saviour. The human instrument in this great change was the Rev. Danzy Sheen, who was then superintendent minister of the Plumstead Circuit. He at once united with our people at Old Sun Street Chapel, and began to work for his new-found Master.

Bro. Bastin’s ‘aptitude as a speaker of ability and intelligence soon led to his being put on the plan as a local preacher. In this capacity he has served the churches with exceptional acceptance for the long period of thirty years. And to-day no layman is more honoured in the area covered by the Woolwich and Plumstead Free Church Council than he. There are few pulpits in the district which he has not occupied as supply for sick ministers, or as locum tenens when they are away on summer holidays.

In the year 1888 the Plumstead Circuit was divided, and Mr. Bastin became the first Circuit Steward of that portion which had Robert Street Church as its head. This position he held with great credit to himself and satisfaction to his brethren for eleven years. Besides these offices our friend has been a class leader for many years, and all who have been privileged to be under his leadership have greatly appreciated the wise counsels – fruit of a ripe experience – which fall from his lips from time to time. It has been the writer’s experience to be associated with Bro. Bastin in this work for the past five years, and next to the impression produced by the leader‘s noble Christian character, has been the influence of the suggestive Bible readings which have been a feature of Mr. Bastin’s leadership from the first.

While Mr. Bastin’s best work has been done in his own Circuit and Church, the wider sphere of the district and the Connexion have had, in some measure, the benefit of his experience and counsel. He is a member of the London II. District Committee and the General Committee. He has attended six District Meetings as the delegate either of his Circuit or the Missionary Committee, of which he has been the treasurer since the death of Mr. S. Plummer. He has once represented his district in Conference, the Conference of 1894, which was held in Chester. Mr. Bastin was sent to that Conference on special business, and he was able to convince the Conference of the justice of the cause he had been sent to plead. That Bro. Bastin has not been sent to the general assembly of our Church more frequently is due more to his own retiring disposition than to any unwillingness on the part of his brethren to send him.

Mr. Bastin‘s business occupation for thirty-five years of his life was that of a Government clerk, first under the Admiralty, and later under the Post Office Savings Bank department. This was congenial employment to him, as it brought him into contact with men of sharp wit and keen intelligence, from, whom he was not slow to profit. For the past eight years Mr. Bastin has been retired, and enjoys a comfortable pension and a well-earned leisure in his snug little villa on Shooter’s Hill.

Mr. Bastin has not been an idle man during this period, for in addition to speaking, reciting, and preaching he discharged the duties of Secretary to the Free Church Council for six years, and is at present a very active member of the Unemployed Committee of the Woolwich Borough Council.

Our friend has not been unvisited by that sadder of God’s angels which we call death. The wife of his youth was taken from him about fifteen years ago, and since then a son of promise, and as recently as last April he lost his eldest daughter, a girl of beautiful Christian character.

If I were asked to name the secrets of Mr. Bastin’s success in life, and as a preacher, I should say, first and foremost is his own clear witness to, and enjoyment of, saving truth. “He knows whom he has believed.” In his preaching the note of genuine conviction is never absent. He preaches a Christ Whom he personally knows and loves. Secondly, there is his strong sense of duty, his high religious conscientiousness. He is never absent from the post of duty. Twice on the Sabbath, and twice during the week, unless planned or ill, Bro. Bastin is in his place in the sanctuary. Nor is he there as a listless hearer; into every part of the service he enters most heartily. The sermon is, however, his delight. He notes every good point, and encourages the preacher from time to time with a hearty response. He is a hearer to whom a preacher instinctively turns for the inspiration of a kindling countenance and a flashing eye.

Thirdly, I should place Bro. Bastin’s full Biblical knowledge, and his considerable acquaintance With general literature and especially the English poets. Mr. Bastin has wisely used the opportunities which his occupation afforded him, and has stored his mind with a wide range of general information. But the Scriptures have been the quarry from which he has dug his richest materials. His skill in exposition, his aptness and accuracy in quotation, are due to his diligent study of the Bible. No one can hope to be a skilful expositor, or a successful preacher of the Gospel, unless he takes pains to acquaint himself with the Bible. In this respect our younger preachers might well emulate Bro. Bastin’s excellent example.

Our friend has never possessed robust health, but by simple living, total abstinence, healthy habits, and a mind steadied by unfaltering trust in God’s providence and love, he has reached his sixty-ninth year, and there is still considerable natural force.

May he, with his excellent wife, be long pared to serve Christ and the Church, and at eventide may it be light with them.

Albert was born on 30 December 1836 at Basingstoke, Hampshire, to parents Charles Bastin and Dennis Barber. Charles was a shoemaker. Albert was baptised on 2 April 1837 at London Street Independent Chapel, Basingstoke.