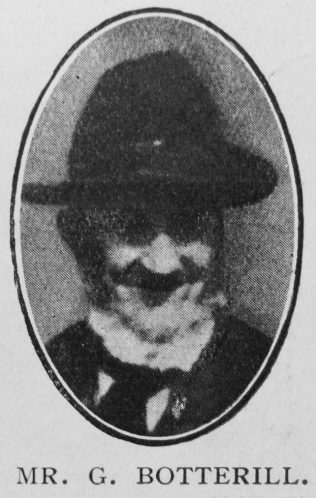 For more than eighty-nine years Mr. Botterill lived at Barwell, in the Hinckley Circuit. In youth he was converted in the Wesleyan Methodist Sunday School, but immediately joined the Primitive Methodist Church. Requested to occupy the pulpit, his efforts met with such appreciation that the Circuit engaged him as Hired Local Preacher for six months. He served as local preacher for 62 years, and as class leader for nearly the same length of time.

As a preacher he was successful. Thoughtful, earnest, but often lengthy, the people marvelled at his wealth of thought and the equal richness of his language. As a hearer he was helpful. To have him in the congregation (and he was always there if possible) was to have a good time. He was also a great reader.

Gratitude and generosity were amongst the more prominent features in his character. Though exceedingly poor, all his life he always insisted on being allowed to contribute to the support of the Church.