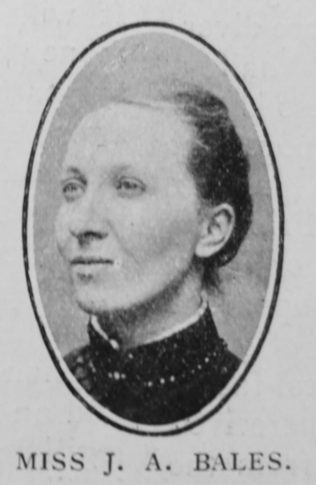 Miss Bales, of the Lord Nelson Street Society, Tyne Dock, died very suddenly September 28th, 1911. Born at Alston, September 20th, 1863, she was converted in 1883, and for twenty-eight years has been a most devout and active worker in the Church. As teacher of the Young Women’s Class for twenty years she has exerted a fine influence upon the young womanhood of the Church. Of a deeply spiritual nature, not only at all the means of grace did she cultivate her spiritual life, but daily at home she had special times for meditation with God. A diligent student of the Bible, she has been Secretary of the Bible Reading Union for a considerable period. For many years, and up to the time of her death she was a member of the Connexional Holiness Associations. She was a generous supporter of Foreign Missions. Great self-sacrifice has been displayed in her life.

The funeral service was conducted in the Lord Nelson Street Church by Rev F. Hobson in the presence of a full congregation. The interment took place at the Westoe Road Cemetery.