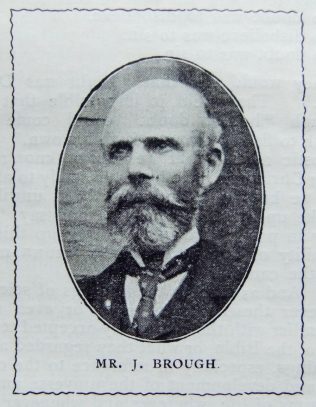 Transcription of Sketch in the Christian Messenger by Arthur Wilkes

“In labours more abundant” is a text which would, perhaps, more aptly than any other describe the religious life and activities of the brother whose portrait adorns this page, and who for more than a quarter of a century has given unstinted service to the cause of Jesus Christ and Primitive Methodism in and around the city of York.

Born of poor, but pious Primitive Methodist parents at Bishop Wilton, in the Pocklington Circuit, in 1848, Joseph Brough enjoyed the priceless privilege of a godly training.

His educational advantages were very meagre, being limited to the scattered and inconsiderable fragments picked up – and lost again – during a fluctuating attendance at a Dame’s School. The fee, we learn, amounted to 1d. weekly, and as the penny was not always available, young Joseph’s initiation into the rudiments of learning was indefinitely postponed. Having to begin work in his eighth year, he grew up in ignorance of the “three R’s” until well into his teens.

When twelve years of age he left home to enter a situation as farm servant, and fell under influences which were far from inspiring. At sixteen, however, it was his good fortune to enter the home and service of a Wesleyan family, who took a deep interest in the youth’s spiritual welfare, with the result that in little more than a year young Brough was soundly converted to God.

With the quickening of the spiritual life there came, as is so often the case, a thirst for knowledge. A Mrs. Jephson, an excellent woman, who is fitly described as a “nursing mother in Israel,” gave Joseph a Wesleyan hymn book, and assisted him in his first efforts to acquire knowledge. The youth himself proved the sincerity of his desire to learn, by saving enough money out of his hard-earned wages to keep him while he spent three months in attending the National School of his native village, which he did the following year. On leaving the situation above referred to, his master gave to him a Bible and his mistress presented him with the then very popular and much-prized little book by Legh Hunt, “The Dairyman’s Daughter.” On going to reside at Great Givensdale, where the Primitives had a small society worshipping in a cottage, the youth threw in his lot with them. Three months later we find him appointed leader of the society class, having for his assistant the lady in whose house the meetings were held – Mrs. Blades, a saint of the old Primitive Methodist type, the influence of whose character contributed in no small degree to the moulding of the character of our friend. Those hallowed meetings in the cottage are among his happiest memories.

In June, 1870, the late Rev. T. Pigott, gave Joseph a Note from the Quarterly Meeting of the Pocklington Circuit, informing him that he was to “follow the star” on the forthcoming plan. In due course he graduated into a full local preacher, and since then has rendered herculean service in that honourable capacity.

In July, 1878, a change of circumstances called Bro. Brough to reside in the ancient city of York, where for a little while he worshipped with our people in the little Nunnery Lane Mission Room; but on removing to the opposite side of the city he joined the old Ebenezer Society in Little Stonegate, with which he has continued ever since, contributing his full share to its manifold activities, and, not least, to those efforts which have so recently resulted in the opening of the new home of the Society, the beautiful and commodious church in Monkgate. For the last twelve years, before old “Stonegate” was sold, he was its secretary, and it is an illustration of the fitness of things that his brother George – who is also an acceptable local preacher and an energetic worker in the church – is the first secretary of the New Monkgate Trust. Mr. Brough’s energies have been unstintedly consecrated to the service of the church of which he is such a loyal son. The movement already referred to, by which our church in York I. has been brought out of a back street into one of the principal thoroughfares of the city, owes not a little to his initiative and enthusiastic support. He has been in active service as a Class Leader for thirty-four years. He is a member of five of the trusts of York I. Circuit. For eight years he occupied the honourable and onerous position of Circuit Steward. But Mr. Brough is par excellence a local preacher. It is in this capacity that he is seen at his best, and his activities in this sphere have been, and are, enthusiastic and untiring. Most Sabbaths his voice rings out the glad message of the Evangel in city or village pulpit in his own Circuit, and occasionally he yields to the heavy and frequent pressure put upon him to serve in neighbouring Circuits. To this work he gives his very best, and regards it as a sacred duty never to neglect an appointment. Possessed with an enquiring mind, and a facility and fluency of speech, an aptitude of homely illustration, and more than the proverbial grain of sanctified humour kept well under control, what wonder that he is well received and his ministrations greatly appreciated and enjoyed. We were delighted on receiving the last Conference Plan to discover that Bro. Brough was put down to “hold forth,” at one of the “stands” at the Conference Camp Meeting. We could not conceive a happier appointment. And those who listened to his homely and interesting, yet powerful discourse on “The Door and The Fold” (John x., 9), will not soon forget it.

It were but meet that the church our brother serves so well should show its appreciation of services so ungrudgingly rendered. And this it has done again and again. On three occasions he has attended the Leeds and York District Meeting, twice as delegate from his Circuit and once as representative of one of the District committees. The last District meeting held at Knaresborough did credit to itself and paid a well-merited tribute to a worthy brother, by electing Mr. Brough as one of its delegates to the Newcastle Conference.

No estimate of our friend would be complete without some recognition of the lady who is the light of his home. Mrs. Brough is a help-meet indeed. She most heartily co-operates in all good works, and takes the greatest possible delight in the ministry of hospitality. Her husband would be the first to acknowledge how great is his indebtedness to her.

Mr. Brough takes an enlightened interest In the questions of the day, both Civic and National, and his influence is ever cast on the side of temperance, righteousness and progress. He has been for many years a faithful and diligent servant of one of our great national financial corporations, and has recently received from it a richly-deserved recognition and reward in the enjoyment of which we trust he may have many happy years.

We pray that health and vigour may be long continued to our friend, and that the future years may have in store for him a rare abundance of the joy of service.

Joseph married Sarah Siddall (abt1853-1886) in the summer of 1874 in the Pocklington Registration District. Census returns identify five children.

Note: I have not been able to identify Joseph in census returns before 1881.