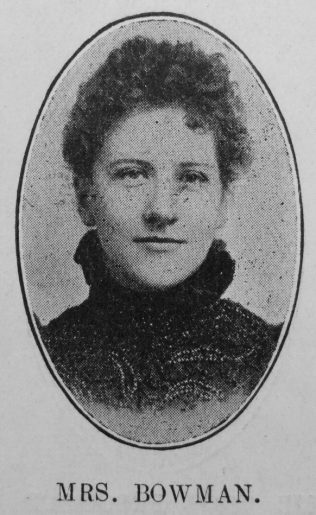 Transcription of Obituary published in the Primitive Methodist Magazine by by A.J.

Mrs. Bowman was born on October 12th, 1870; she passed to God on September 19th, 1908. Her maiden name was Sarah Sunderland, and in her early years her heart and life were surrendered to the Saviour. She was always ready to serve Christ and His Church as opportunity offered. She began to collect for our missionary funds in her girlhood, and continued that service for nearly twenty years.

She was one of the most zealous and intelligent Christian Endeavourers in the early years of the movement, and rendered great service in the establishment of the C. E. Society at Bingley. The evangelistic passion burned in her soul; she was eager to see people converted, and was able to point the seeking anxious soul to the Saviour. To many a sick one she carried a benediction; she knew how to cheer the saint and guide the sinner. In financial efforts for the church she was as busy as any; in work for bazaars and tea meetings and concerts she was ready to do her utmost and her best. She was one of the noble women, who laboured in the Gospel for many years.

Fifteen years ago she was married to Mr. Harry Bowman, who has been for many years the C.E. Secretary and one of our society stewards. Their married life was full of happiness, marked by mutual esteem and confidence and love.

Several years ago sickness came upon her, which gradually compelled her to relinquish her work in the church. After long suffering she underwent an operation, but was nothing better for it, but grew steadily worse. She longed to live, and when, after months of agony, the doctors stated that only by another operation could her life be spared, she submitted to it, but from this she never recovered. In Bradford Infirmary her spirit was released. Her husband and boy mourn the loss of one of the best wives and mothers, and our church at Bingley has lost one of its most faithful workers. For Christ she lived, in Him she died, with Him she lives for evermore.

Sarah was born on 12 October 1870 at Bingley, Yorkshire, to parents Robert Sunderland, a tailor, and Elizabeth Hague.

Before her marriage Sarah worked as a worsted weaver.