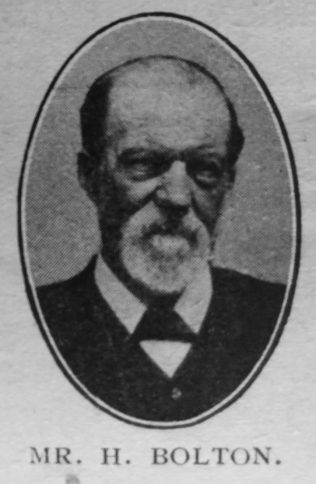 Transcription of Obituary in the Primitive Methodist Magazine by J.H. Hirst

Mr. Henry Bolton, of Bristol Hall Church, Birmingham, was one of the outstanding personalities in the West Midland District. Born in an Oxford village, August 28th, 1833, he removed to Birmingham in his early manhood, and came into touch with our church at old Gooch Street. Soundly converted there in 1856, he maintained an unbroken membership of over sixty-five years, and showed an ever-deepening interest in all that concerned Primitive Methodism. A man of striking gifts, he gave himself with whole-souled abandon to Christian service, and was always to be found in his place. In all the phases of thought and service he was keenly interested, and it was his exceeding joy to share in the work. Buoyant in spirit, optimistic almost to an extreme, his witness was radiant and winsome. His spiritual life was nourished on the worship of the Church and the great ministries of the Scriptures and sacred song. He loved the sanctuary, gloried in its praise-service, shared devoutly its prayers, exulted in its fellowship in class and worship; for over half a century he never missed a prayer meeting or a watch-night service. He had a passion for evangelism, and in the open-air, as in the church, preached and sang the good news everywhere.

In business he was honoured, achieving considerable success; he was yet unspoiled, and some of the finest tributes to his rectitude and trustworthiness came from leading business and professional men with whom he had been closely associated. One said what many felt, “Henry Bolton had a heart of gold.” Taking a full share of responsibility, he served church, circuit, district and denomination. Trustee for numerous chapels, he was ever ready for aggressive policy, and one of the last to retreat. His very optimism may at times have led to mistakes of judgment, but he was a moral tonic and a great encourager of men. “A perfect gentleman” and a “Primitive through and through” were descriptions from his own folk, and both were true. Many times a representative to the District Meetings, he was also six times a delegate to Conference, and a representative to the Ecumenical Conference in America. Passing away at Bournemouth, he was interred at Lordley Cemetery, Birmingham, the funeral and memorial services being taken at Bristol Hall, large and representative companies attending. The note of victory ran through all the services. In our friend’s triumph we rejoice, and for his life give fervent thanks.

Henry was baptised on 15 September 1833 at South Newington, Oxfordshire. His parents were John, a shoemaker, and Hannah.

Henry died on 6 May 1921 at Southbourne, Bournemouth, Hampshire.