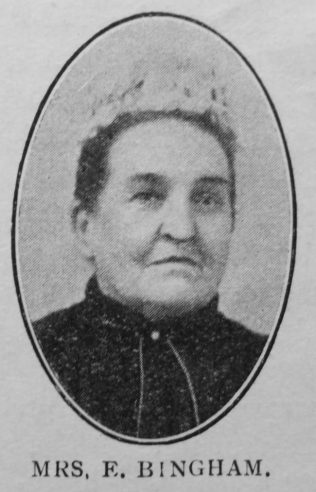 Transcription of obituary published in the Primitive Methodist Magazine by J.K.

By the death of Mrs. Elizabeth Bingham, on May 26th, 1909, a quiet, useful life was closed, and the John Street Church, Sheffield, was called once again to mourn the loss of one of its senior members. Mrs. Bingham was born at Ashby, Lincolnshire, a place of note in Primitive Methodism as the birthplace of the Kendalls, four of whom were in our ministry. Between this family and the Hirds, of which family Mrs. Bingham was a member, there was a close connection.

At the time of her marriage to Mr. Job Bingham, North Wheatley, near Gainsborough, became for a time their home.

Forty-one years ago, after the death of her husband, Mrs. Bingham, with her family of six, came to reside at Sheffield. She had a heavy responsibility, her youngest child being ten years of age.

She was devoted to the interests of the Church, and it was a source of grief to her, that owing to the precarious state of her health her attendance at the services for a considerable time was so intermittent. On the Sunday before her departure she said to her son, who, with the exception of about nine months, had spent the whole of his life with her, “My one desire is that I might get to chapel again.” This, however, was not permitted to her; for three days later she was suddenly called to the higher service. None of her family were with her at the time. On that morning Isaiah xliv. 1-8 had been read to her, and at the words, “Fear ye not, neither be afraid,” she said, “That is beautiful.” She had often talked of a possible sudden departure, and added, “I am not afraid, it is all right.”

The funeral, on Saturday, May 29th, was at Burngreave Cemetery, the Rev. J. Shaw, of Hull, officiating. On Sunday, June 13th, the Rev. J. Keighley made special reference to the life, character, and death of the departed to a large and deeply-affected congregation.

Elizabeth was born abt1835 at Ashby, Lincolnshire, to parents John, a farmer’s bailiff (1841), and Elizabeth.

Elizabeth died on 26 May 1909 at Sheffield, Yorkshire.