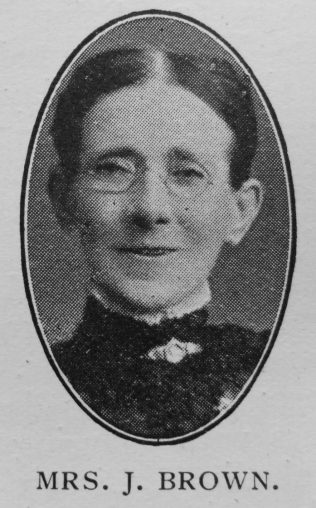 Transcription of obituary published in the Primitive Methodist Magazine by G.B. Gleghorn

Cobden Street Church, Peterborough II., has had a splendid band of loyal and devoted workers, but none more loyal and devoted than Mrs. John Brown. Born of God-fearing parents (her father was a local preacher for more than sixty years) on July 6th, 1852, at Feltwell, Brandon, Norfolk, at twelve years she accepted the Lord Jesus. She entered the Sunday School, and was most energetic and faithful in seeking the conversion of her scholars. She was a very interested and industrious worker in aid of building the Cobden Street Church.

About seven years ago her strength began to fail, but by sheer force of will she accomplished much. Her sufferings she bore bravely to the last, perfectly resigned to the Great Father’s will. On March 6th, she gently passed into the Eternal, like a child going to sleep. Part of the funeral service was conducted in the Cobden Street Church by Revs. T. McKenzie and J. Davidson. The writer read the committal sentences and subsequently conducted a memorial service. And so has passed an affectionate wife and a most devout and consistent Christian.

She married John Brown (1850-1911), a railway foreman engine cleaner (1901), in early 1873 in the Thetford Registration District, Norfolk. They had one child that died in infancy.