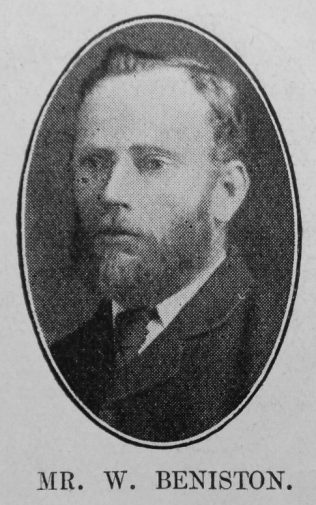 Our Heath Hayes Church, Bloxwich and Cannock Circuit, is the poorer for the departure from this life of William Beniston, Dec. 24th, 1908. Up to three years ago, he regularly prepared and taught his Sunday School lesson week by week; then on account of failing health his name was put on the honorary list of teachers. He was loved and revered by all who had the privilege to know him. He took a great interest in the building of our Heath Hayes church, and had great joy in seeing all his children contributors at the Stone Laying ceremony.

He was born at Hall Green, near Darlaston, March 2nd, 1840. His parents were so poor that he was sent to work in a blacksmith’s smithy as bellows’ blower, at the tender age of seven.

When nine years old he went to work in a coal mine. He followed that vocation for fifty-seven years. It is probable he began to attend Sunday School in very early days, but it is certain that when only eleven he was presented with a beautiful copy of the New Testament for regular and early attendance. This book is still in good condition; and is naturally much prized by his family.

At Sunday School he learned both to read and write. While in his early teens his parents removed to Wednesbury where he joined our Camp Street Sunday School and Church. He received a ticket of membership in Feb., 1860. Five years later he took the next best step to uniting himself to Christ. He united himself to a good wife. Happily for her family she is spared to them. For years past the preachers of the Gospel have been warmly welcomed to the hospitable home of the Beniston family.

Four children and one grandchild are teachers in our Heath Hayes Sunday School. The eldest son has passed through all the offices of the school, and been seven years its superintendent. He is at present President of the Christian Endeavour Society and also President for 1909 of Rugeley and District Christian Endeavour Union. May this excellent family long be spared to uphold the traditions of their worthy sire.

William was born on 2 March 1840 at Hall Green, nr Darlaston, Staffordshire, to parents John, a coal miner, and Mary Ann.

William spent his working life as a coal miner.