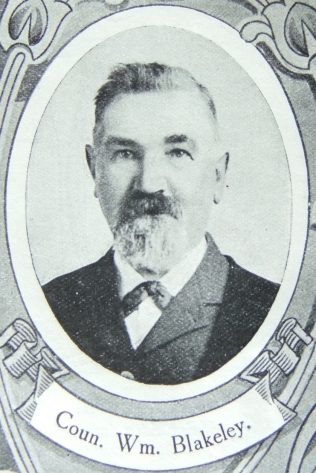 Councillor William Blakeley, the Circuit Steward of the Pudsey and Stanningley Circuit, is a life-long and loyal Primitive Methodist. He joined the church when Pudsey was connected with Bradford, and when there was but one Circuit in that city. He has served his church as Teacher, Class Leader, preacher, Superintendent, and in many other capacities. When at Laisterdyke he was appointed to take charge of a forlorn hope, and the Society was so uplifted it has never looked back since. A special feature of his work at Pudsey has been the young Men’s Class, which he conducted successfully for many years. Mr. Blakeley has represented his Circuit at District Meetings and the District at Conference. He has taken a share of public life, and is now a member of the Pudsey Corporation. Our brother’s connection with our church covers a period of 56 years, but we trust there are yet many years of useful service ahead.

William was born abt 1849 at Rothwell, Yorkshire. His father, Samuel, was a collier.

William was a woollen spinner and later became a general draper and boot seller.