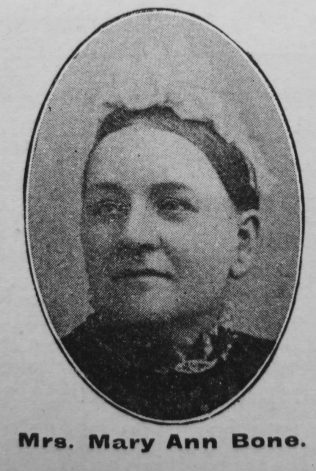 Transcription of Obituary in the Primitive Methodist Magazine by W.S.

The subject of this memoir, Mary Ann Bone, was the daughter of John and Betsey White, and was born at Luton, on December 29th, 1842. At a very early age she became a scholar in our school at High Town, and while yet of tender years felt the strivings of the Divine spirit, to which, at the age of 13 years, she yielded by surrendering her young life to God. Of a deeply emotional nature, she now had exceptional delight in the class meeting, love-feasts, and services of a kindred character. She became a teacher in the Sunday school, which position she continued to fill until the time of her marriage with Mr. J. Bone, who was at that time a member of our Church, and who has since creditably filled well nigh every office that a circuit can bestow upon any individual.

During the ministry of the Rev. R.R. Connell upon this station she became a local preacher, the duties of which office she discharged with such conspicuous ability that her services were soon in great request. But her chief work was in visiting the sick and the poor; for this her cheerful disposition, tender sympathy, and thorough knowledge of her Bible and hymn book eminently fitted her; and because she possessed these qualifications the Guardians, at the request of Mr. Connell, granted her special permission to visit the infirmary sick wards, where her ministry was very much appreciated, as the following tribute from an inmate published in the local paper testifies:- “She (Mrs. Bone) passed on her way on her cheery, suitable, ward ministry. ‘Everyone is very good to me’ said the writer. ‘So they will be; it is written,’ ‘He shall give His angels charge concerning thee,’ replies the visitor. We just lived upon that text until about three weeks ago, when the same form was passing round our ward again, giving forth in the same voice of sympathy and cheer her loving messages from heaven. When we reminded her how precious it had been made to us during the interval, she exclaimed joyfully, ‘I’m so glad,’ and then quoted another that we are living upon yet.” The following is the pathetic way in which the same writer refers to Mrs. Bone’s death:- “ Last Friday, as we read, out of the newspaper accounts, of this real servant of Christ having been called up higher, the whole ward was moved; how deeply, only those who have shared in the good cheer she brought us from time to time can form the least idea.”

Mrs. Bone was a sincere believer in the efficacy of prayer, and truly marvellous are many of the answers that she received to her own petitions.

For some time previous to her death it became evident that her strength was fast failing, still to the last she persisted in doing “what she could.” A fortnight before she passed away she drove out to Barton for anniversary services, and her last words were with regard to her appointment at Leagrave on the following Sunday.

On April 24th she was seized with an attack of pneumonia, to which she succumbed on the evening of the 27th, and on May 1st, the 35th anniversary of her wedding, her mortal remains were laid to rest in the Luton cemetery.

Mary was baptised on 4 June 1843 at Luton, Bedfordshire. Her parents were John, who worked the land, and Elizabeth (Betsey).

Follow the link to the page on Luton First Circuit to view a picture of James Bone.