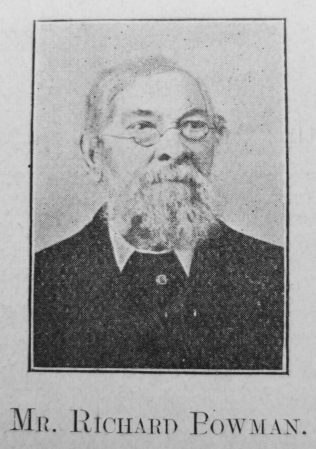 Transcription of Obituary in the Primitive Methodist Magazine by M.P.D. (Matthew Pattinson Davison)

In the fulness of his years and crowned with the affectionate regard of a large circle of friends, Mr. Richard Bowman, on the 13th of October last, passed into the heavenly sphere. He had reached his eighty-fourth year, and was one of the oldest and best known Primitive Methodists in Leeds. About sixty years ago he joined the society at Quarry Hill Chapel, and remained associated with it until the day of his death. The old place never had a more devoted friend or a more liberal supporter than he. He was an ardent Sunday School worker, and in later life he had the satisfaction of receiving many assurances of the success of his labours. Failing strength compelled him some years ago to relinquish his work in this department, but to a week before his death he diligently discharged the duties of a class leader, and took an active part in all the business pertaining to the chapel trust. Through life he was also greatly devoted to the cause of Temperance, and in his earlier years he had the distinction of being a close friend and fellow-worker of Mr. Tunnicliffe, the celebrated founder of the Band of Hope movement. He was always full of interest in the work and development of his Church, and keenly alive to the religious movements of his time.

He was called way at a time when, to all appearance, his presence and help were sorely needed. Quarry Hill, the mother chapel of Leeds Primitive Methodism, had just given birth to another new cause. In the rising district of Harehills, a new church had just been erected and some fifty or sixty of the Quarry Hill members were migrating there, but Mr. Bowman intended to remain at the old place. At the last service attended by the undivided congregation he was greatly affected. On the Wednesday following he attended the opening services of the new Church, and expressed himself as delighted with the meetings and the prospects of the new enterprise, but was afraid that it “would thin poor old, Quarry.” He appeared to be in the best of health, and next day he insisted upon going to a passive resistance meeting in the centre of the city. On his way he had a paralytic seizure in the street, and was taken to the Infirmary where he lay until the end came. Notwithstanding his eighty-four years it must be said of him that he died in harness, and his place will be hard to fill. His remains were interred in the Woodhouse Cemetery, but it will be long before his memory fades from the minds of the Primitive Methodists of Leeds.

Richard was born at Halton, Leeds, Yorkshire, to parents George, a tailor, and Ann. He was baptised on 9 November 1819 at St. Mary, Whitkirk, Yorkshire.

Richard worked as a tailor and built up a sizeable business; his estate on death was given as £15.6k.