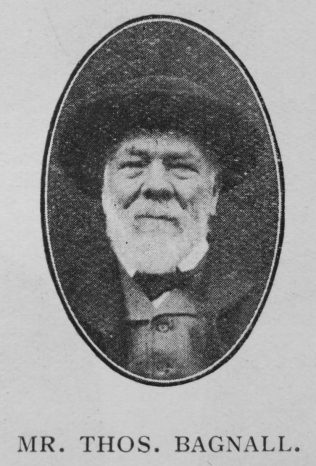 Mr. Thomas Bagnall put on immortality on Thursday, May 18th, after a useful life of eighty-three years. He was bore at Wrise Hill (Wrine Hill), Staffs, Aug. 31st, 1827. Cradled in Primitive Methodism, he delighted to tell how he had sung for Hugh Bourne when a little child. But a youth when his name appeared on the plan, he was soon in constant demand.

Coming to Bollington, he threw himself heartily into the work. It was a great joy to hear him tell of his experiences when going to his appointments. For two years he waited patiently for the call. He fell asleep, and was laid to rest in Bollington Parish Graveyard on Saturday, May 20th. Rev. C.T. Bishell conducted an “In Memoriam” service May 21st.

Rev. J. Biggs writes: “He was a most earnest and acceptable preacher.” Rev. P. Kay writes: “To hear him in prayer was indeed a means of grace.” Rev. G.H. Southall writes: “It was quite bracing to hear him discourse on the deep things of God.” Rev. J. Bradley writes: “He had a deeply religious nature and a rich spiritual experence.”