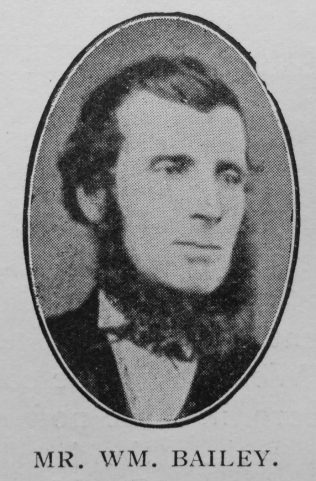 Transcription of obituary published in the Primitive Methodist Magazine by J.H.R.

The death of Mr. Bailey has deprived the Watton Circuit of one of its most useful local preachers and workers. After an illness that lasted three weeks, he entered into rest on July 4th. For 52 years he was a local preacher. During that time he fulfilled a faithful ministry. His services were in great request and a hearty welcome was given him in the pulpits of all the Free Churches in the locality in which he lived. He delighted in the work, and was happy in making new sermons till the last. His last service was at the Wesleyan Church, Watton, on Whit-Sunday evening.

The Class Meeting was always an attraction to him. Very seldom did he miss attending that held at Ovington, the little village Society to which he belonged. He took a keen interest in public affairs, and was especially delighted at the better prospects for the aged poor and the working people. He was one of the first members of the Norfolk County Council.

He had very few advantages in his early days, but was ever a keen student of nature and what books he possessed. His was a useful life, and his reward is sure. He was born in the village of Tottington 71 years ago, and owed his introduction to Primitive Methodism to the Rev. Robt. Church. The Watton Circuit places a high estimate on the value of the work he did. As many of the officials as could attend did so on the 8th of July, when his body was laid to rest in the Free Church Cemetery, Watton.

William was born abt1840 at Tottington, Norfolk, to parents John, a farm bailiff (1851), and Susannah.

He married Sarah (Sally) Crone (abt1830-1891) in the spring of 1860 in the Swaffham Registration District, Norfolk.  Census returns identify one child.