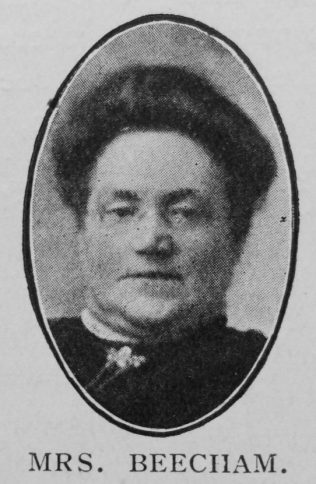 Transcription of obituary published in the Primitive Methodist Magazine by A.B.

Hannah (Mrs. Thomas) Beecham has been a member of Rehoboth society since her girlhood. From her marriage she and her husband for twenty-five years have been among the most devoted, loyal and generous workers at Rehoboth. There was no desire to win the favour of others, or to obtain a high position in the Church. The service that she could render attracted her. Quiet, unassuming, she won her way into the hearts of a great many friends by her sincerity and unbounded kindness. Her religion was the principal thing in her life, and her goodness was of the order that attracts.

After several months of sickness she quietly passed home on the 21st of December. She repeated the words of the hymn sung at the last meeting of the ladies’ class she attended: “Under His wings I am safely abiding,” and she told her husband and children she should spend Christmas in heaven.

A large number of friends and  sympathisers gathered around her grave, and also attended the memorial service held the following Sunday. Her influence will live for many a day to come.

Before marriage, Hannah worked as a cotton weaver (1881).