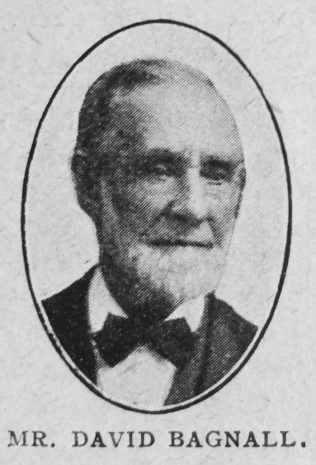 Transcription of Sketch In the Christian Messenger by Rev. J. Redhead

MR. DAVID BAGNALL, born at Brierley Hill in 1832, came to Wednesbury when ten years of age, and joined the Tea Brook Sunday School, Tipton Circuit, and has the remarkable record of seventy years’ unbroken connection. For fifty years he was the teacher of a Young Women’s Bible Class, through which many of the present-day workers and also their mothers have passed.

For sixty-six years in succession he has been elected Superintendent, a position which he holds to-day, though in his eighty-ninth year. As a Sunday School worker he has shown unusual fitness. He is deeply religious. He has sought for personal decision for Christ, to which many have gladly responded, and to-day are themselves workers in Sunday Schools, Local Preachers, while seven have entered the Christian ministry, one of whom is a missionary in China. He has sought, by training class and distribution of school literature, to beget efficiency in the teachers. He is a great lover of punctuality. He makes the proud boast of never having been late but once in seventy years, and that once was occasioned by his zeal and determination in looking up a young man who was wavering. He is a strong disciplinarian, a lover of method and order. This has secured the best conditions for teaching.

He has been the recipient of many testimonials of gratitude and appreciation, amongst which are the “Roll of Honour” of the London Sunday School Union, and an “Illuminated Address” given by his co-workers on his seventy-fifth birthday, from which the following extract is made:

“We would now wish for you and your loved ones, especially Mrs. Bagnall, whose life has been an inspiration and strength, many years of fruitful, peaceful pilgrimage, and when the splendours of a rich eventide cease, the breaking of that beautiful eternal day in radiant light which will be your well-earned Heaven.”

For thirty years he served as a member of the Wednesbury School Board, and the following letter will testify of his merits:

Permit me, as Mayor of the Borough, to offer you my heartiest congratulations on the attainment of your eighty-eighth birthday. I have known you practically all my life and well remember the keen and active interest which you evinced in educational administration. In addition, your lifelong activities are closely interwoven with the progressive development of the borough, and you have ever been held in the highest esteem by the community generally. In the evening-time of your life it will cheer you to know that your public work has been greatly appreciated by your associates.

With best wishes for your continued happiness.

His great age and inclement weather render it impossible for regular attendance, but whenever opportunity affords he is found in his place in the Sunday School.

Working, watching and waiting till the Master says: “It is enough. Well done! Enter thou into the joy of thy Lord! “

David was baptised on 5 January 1834 at Brierley Hill, Staffordshire. His parents were Isaac, a pudler, and Sarah.