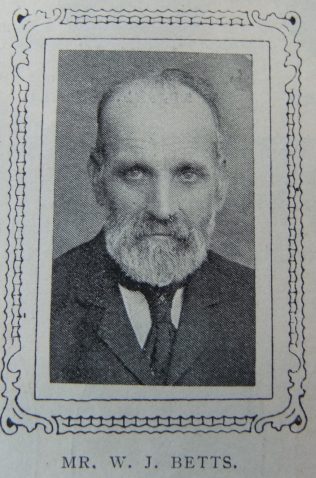 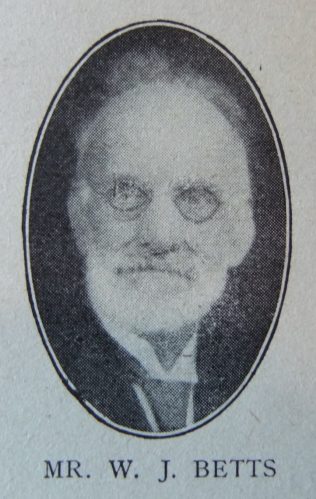 MR. WILLIAM JABEZ BETTS was born at Thetford, Norfolk, in 1844. He has been a Primitive Methodist all his life; went to Sunday school at three years of age, became a teacher in his early teens, a local preacher at seventeen, and has been a Class leader for five and thirty years. He has always stood well with his brethren. They have showed him their confidence and love in all the ways possible to them. He has been a representative in three District Meetings and two Conferences. For many years he has belonged to Hockley Church, Nottingham Second, and is highly esteemed by all the friends. He is a most loyal Primitive Methodist, large in his sympathies and generous in his gifts. Local claims receive a hearty response from him, and he never forgets his annual subscription to the orphanage and the Missionary cause. He works hard for his “daily bread” and is by no means a rich man, but he believes in giving. It is a joy and luxury for him to render a fair share of his substance unto the Lord. As a Class leader we imagine that he is pretty old-fashioned, and sticks very much to the methods of former times. He has a rare rich experience. His mind is well stored with choice portions of Scripture. He has acquaintance with the lives of some of the finest saints. There is fire and inspiration in his speech. His counsels are wise and practical. He cultivates the spiritual in himself and his members. The revivalistic note is in his words. He conducts his charge into the inner sanctuary of the temple and into the green pastures of the divine life and service. Everything he says and does centres in the Christ. He aims at securing paying and praying members.

His obituary records that he was a local preacher for sixty-five years, serving with sanctified zeal and much acceptance.