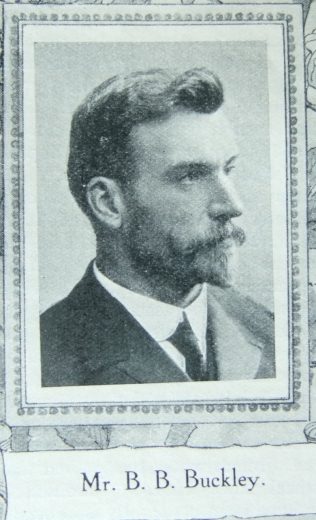 Mr. Benjamin Bayliss Buckely, in the prime of life, just over forty, for twenty-years has been a member of the Motherwell Church. Everywhere held in the highest esteem, he is manly, strong with a strength that has been touched with gentleness, his kindly consideration has won for him the confidence of all. He honourably fulfils several important offices, among them that of Treasurer of the Trust Estate. The church has a supreme place in his affection, and he supports its varied interests with a devotion and generosity which are admirable. He has many interests outside his own church, and no worthy appeal fails to meet a generous response, but the claims of his own church are paramount –even to the attendance at Week-evening services and prayer meetings. His wife is as loyal as he, and the circle of the home is fragrant with the graces of piety and love.

Benjamin was born in 1867 at Heath, Staffordshire, to parents Benjamin Samuel and Ellen. Benjamin senior was a tin plate assorter. The family moved from the Midlands to Motherwell when Benjamin was young.

Benjamin worked at the steelworks in Motherwell as a plate roller (1901).

Benjamin died on 22 May 1952 at Motherwell, Lanarkshire.