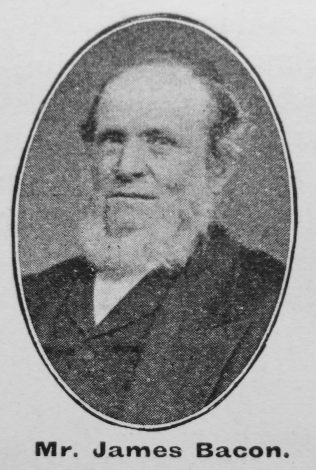 Transcription of Obituary in the Primitive Methodist Magazine by John Bacon

James Bacon, of Nottingham, was born March 5th, 1816. In consequence of the death of his father, he was sent to work at the age of six. All the education he received was at a Sunday school. His first religious impressions appear to have been received in our Cross Lane Sunday School. Unhappily, he became acquainted with worldly companions; but amid his pleasures, the prayers of his sister followed him, so that he became concerned about his soul’s salvation; at length in the year 1834 he found peace with God, through faith in our Lord Jesus Christ. He joined our Canaan Street Society, and soon became a Sunday School teacher, and then a local preacher. This latter office he sustained with great acceptability. His appointments were numerous, often ten or twelve Sundays during the quarter. His sermons were pointed and practical. He was particularly successful in open-air missions and camp meetings. During the superintendency of the late Rev. J. Brownson, Hockley Chapel was bought from the Wesleyans, and our brother became the leader of the first class. As a leader, he was much loved for his scriptural teaching and his deep sympathy with his members. He continued to lead that class, until old age and distance compelled him to join our Forest Road Circuit. During many years, he was in great request for the pulpits of Forest Road Circuit. During many years he was in great request for the pulpits of other churches. The esteem of his circuit was shewn October 2nd, 1884, when a large meeting was held to celebrate the jubilee of his membership, and the friends presented to him the History of our Connexion and a beautifully illuminated address. He continued to evince deep interest in the affairs of our Church and the work of God in other Churches, and as long as he was able, to preach the gospel of Christ.

During the last few years, the feebleness of old age gradually increased, so that at length he was confined to his bed, When spoken to about the wonderful work of Jesus, he said “glory.” On the Sabbath previous to his death, he said to his son John, “Jesus saves me, praise Him.” He also stated his firm belief that in heaven we shall know each other. And so he lingered until Thursday, January 29th, 1903, when, without a struggle, he passed away, to the home of the saved, to be for ever blest. The funeral service was conducted in our Forest Road Chapel, by the Rev. C. Tinn, assisted by the Revs. F.P. Argall (Methodist New Connexion) and W. Price. His beloved class leader, Mr. T. Smedley, of New Basford, delivered a most impressive and profitable address. Many friends from the town and country churches assembled in the general cemetery where the committal service was read by the Rev. C. Tinn; prayer was offered by the Rev. J. Snaith, and one of his favourite hymns was sung.

A largely attended and very impressive Memorial Service was conducted by the Rev. C. Tinn, in the new Basford Chapel, on Sunday evening, February 15th, the selected text being II. Tim, iv., 7.

James was baptised on 17 March 1816 at Nottingham, Nottinghamshire. His parents were Joseph and Ann. James worked as a hatter.

He married Sarah Lowein (abt1816-1847) on 23 May 1836 at Basford, Nottinghamshire. Census returns identify six children.