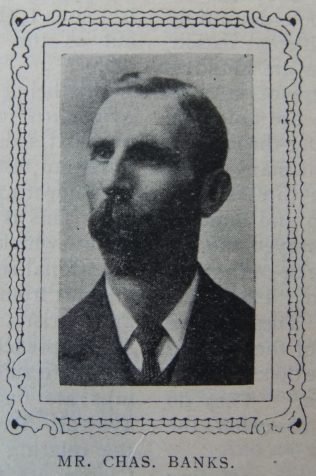 Mr. Charles Banks was born at Stafford. His father, who was connected with our Snow Hill Church and School, very wisely took Charles, as soon as he could walk, to the school, and his connection is yet unbroken after a period of fifty years, as infant, scholar, secretary, teacher, and in the end many years as superintendent. He has also served the church as Society steward, trust treasurer, local preacher, etc., but it is as Class leader he excels and has done his most effective work. He delights in it, so there is hearty ungrudging service. To secure attendance he invites the stranger and others, visits the absentees and members aided by visiting bands, writes letters to them in times of sorrow, joy, removal, etc., and this with a roll of 120 members and attendance of fifty or sixty, involves much work for a busy town official. The meeting is conducted on modern lines; programme ever varied, arranged a week ahead; different persons announce hymn, read Scripture, pray, give testimony, solo, also an address on selected topic; the leader or one of the assistant leaders presides.

Spiritual profit being the one aim, faithful counsels, admonitions and ideals are presented, including financial duties as members loyally bearing their share of responsibility according to their means, arrears being a discredit. Several young men now in our ministry, and others in the Canadian ministry, owe much to this class and school and the sympathetic help rendered to them personally by Mr. Banks when their lives were taking direction and their characters being moulded.

The annual gathering of the class, with its tea, and public meeting with special speakers, is unique, interesting, and profitable.

Charles was born in 1859 at Stafford, Staffordshire, to parents Christopher and Elizabeth. Christopher was a clicker in the shoe trade.

Charles started his working life as a boot clicker, but by the time of 1891 census he had become a district rate collector for the Stafford Corporation.

Charles married Martha Owen (abt1855-1922) in the spring of 1884 at Stafford, Staffordshire. Census returns identify one child.