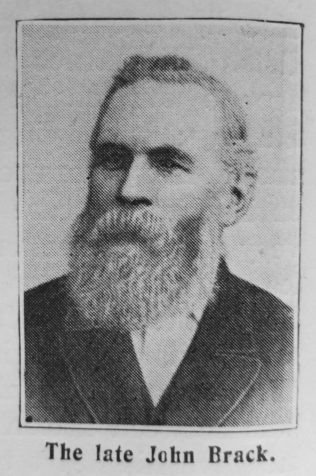 Transcription of Obituary In the Primitive Methodist Magazine by H Yooll

MR. J. BRACK, who has passed away in the sixty-fifth year of his age, was born at Long Benton, near Newcastle-on-Tyne, of poor but hard-working parents. He knew the difficulties and limitations of a miner’s lot in the forties, and for some years followed the perilous calling at Hebburn, Harton and other collieries. The brave youth availed himself of such education could be got by attending both the Wesleyan and Primitive Methodist Sabbath Schools of Hebburn Colliery, and by joining a select class held on a week-day evening by the late Mr. John Richardson, of worthy memory. At the age of fourteen, during the ministry of the late Revs. J. Day and H. Yooll in South Shields Circuit, he joined the Society. He was a lad of much promise, but temptation’s darts were many, and particularly that of drink, so that in his journal he regretfully records a brief period of lapsing, in which he was never happy, but, like Gad, he overcame, re-joined the Church, and soon became a diligent Sunday School teacher and then a class leader and local preacher. In the year 1858 he was recommended for the regular ministry, and received a call from Carlisle, but did not see his way to accept it, believing that his work lay “at home.” His subsequent career did not belie that decision, for he was an ideal layman, and South Shields Circuit will long cherish his memory with deep and ardent affection and gratitude.

He was united in marriage to Miss Margaret Dawson, sister to the late Revs. J. and J.M. Dawson. He was wont to say, “No man was ever blest with a better wife than I had. My marriage day was the brightest of my life; the day of her death was my darkest.” It is a touching coincidence that Mr. Brack died on the day of the seventh anniversary of his wife’s death. Her memory is still green and fragrant, and their union meant years of devoted and generous work for the Church and for Primitive Methodism in the North of England. They removed to the town of South Shields in 1862, and shortly after Mr. Brack entered into business, in which it pleased Providence to prosper him. He became class leader and trustee at the old and famous Templetown Chapel, and when the present church at Laygate Lane was erected in its place, he and his wife were foremost in generous gifts and active service, the scope and value of which “the day of the Lord” only will declare. At a bazaar held in 1883 the stall of Mrs. Brack alone yielded the handsome sum of £225. It was their delight to entertain the preachers and to tender manifold unstinted and continuous service to the various interests of the church, the Circuit and the Connexion they so dearly loved. Mr. Brack was a most acceptable preacher, and in his earlier days was one of a notable band of popular and able men in the old South Shields Circuit. Our departed friend for many years acted as Chapel Treasurer and Society Steward in our Laygate Church, and was one of those who could always be relied upon both in counsel and action. Twice he represented his Circuit in the District Meeting and at Conference. in the latter court he had the honour of nomination for the Vice-Presidency. This position he did not seek, but had he obtained it no one would have graced the office with more dignity and efficiency. He was a trustee for nearly all the chapels in South Shields Circuit, which, before division, was very large and included the present Jarrow Circuit. Mr. Brack is survived by four brothers, who are valued members of our Connexion. Of his two daughters, one is the excellent wife of the Rev. H. Pratt, of Newcastle Third Circuit; the other is a much esteemed worker in our Laygate Church. Our friend was a well-known public figure in South Shields, and was held in very general and much-deserved respect by all classes.

The local Press gives the following tribute to his worth:- “Mr. Brack, although he took an active interest in public affairs in general, was first and foremost an educationist, and it was as a member of the South Shield School Board that his most useful public services were rendered. He was first elected a member of that body in January, 1889, and sat on every successive Board from that time. He was an able colleague of the late Chairman of the Board, and always supported the forward, progressive policy which has accomplished so much in the way of providing advanced educational facilities in the Borough. Mr. Brack was exceedingly popular both among the members of the Board and teachers serving under them. Until ill-health prevented him, he was always one of the most regular attenders of committee as well as Board meetings, and for three years at least presided with credit over the deliberation of the Finance Committee. He took a warm and intelligent interest in municipal matters. He was a staunch Liberal in politics, and took a vigorous part in all Parliamentary elections, particularly in the election campaigns of the late member, Mr. J.C. Stevenson, on whose committee he served.”

He thus believed that a Christian man will seek to make his country Christian in its laws, institutions and politics, that good citizenship extends, not only to tax-paying, but voting and efforts to make the rule of the land righteous, wholesome and pure.

To speak of Mr. John Brack as a man, it was apparent that he owed not a little to Nature’s dowry. It is no exaggerated praise to describe him as one of “Nature’s gentlemen.”

“His life was gentle and the elements so mixed in him that Nature might stand up and say to all the World, ‘This was a man.’” And what Nature gave, grace enriched and exalted. He was a man of shrewd common sense and ripe judgment, and he had a manly tone about him that told of hidden power; but he had a heart soft and tender as a woman, which won from those who knew him, not only admiration, but love; but beyond this, we rejoiced to claim in him the rich inheritance of a grace far beyond the common-place level of ordinary Christian life and to thank God that such a gracious spirit lived and laboured amongst us as one of ourselves. If Christianity in action may be described as “the finest of fine arts,” our brother evidently knew its secret and practised it. This he did without ostentation or self-display. His life was hid with Christ in God, and the sources of his power were fed and re-fed by daily communion and prayer. There was a quiet moral force about him which one might call “weight,” which gave his words and deeds a deep and abiding influence for good. We were struck with the roundedness and fine balance of his character. His life was shaped to finest issues and was all of a piece. Devotion and practice, creed and conduct, the sanctuary and the street, were happily united as sap and fruit in a tree; his ends and aims were everywhere one. Singularly free from lop-sidedness or angularity of character too often seen among Christians, and ever ready- at the call of duty under whatever form it came, he has left a gap behind him alike in church, home and town, which will not soon or easily be filled. Living a devout daily Christian life, more to be felt than seen, he resembled not the noisy cataract or the swollen torrent, but rather the deep, full, quiet, flowing river, carrying fertility to the landscape and touching into freshness and beauty what would otherwise be barren desert. To the end he held with a firm grip the great saving verities of the Gospel, whose power unto salvation he had so deeply proved and whose message of everlasting life it was his joy to preach to dying men. His closing days were full of a settled peace. it was not a time of fanciful, disturbed feeling and shrinking from the Divine Will. He would have been glad to live, but he was not loth to die, since dying was but “going home.” His death is a great sorrow, but it is some compensation to think that God has spared His servant so long and that also he has not been called to pass through slow declining years of decrepit old age. Taken from us as it were in the midst of his accustomed work – albeit his sun was westering – the impression of his individuality is keen, sharp and vivid, and the lesson of his life all the more outstanding and clear. He is gone, but the grave does not hold him. ‘Tis ever wrong to say a good man dies. By the grave of our friend we gather fresh and firmer belief in the life to come.
By the bright waters now thy lot is cast,
Joy for thee, friend, thy bark hath passed
The rough sea’s foam.
Thy place is won, thy heart is filled, thou art gone Home.

A large and impressive funeral, attended by many ministers of our district, by others from the town – including Church of England and Roman Catholic – and by a host of fellow-members in the Circuit, as well as townspeople generally, testified to the wide esteem in which our brother was held. The memorial sermon was preached by the writer to a crowded congregation in Laygate Chapel. A gracious sense of the Divine nearness was felt, and in fitting accord with the deceased’s spirit, memory and work, the Lord’s saving power was manifest.

John was baptised on 6 November 1835 at St Bartholomew, Long Benton, Northumberland. His parents were Andrew, a coal miner, and Alice.

John married Margaret Dawson (abt 1831-1893) in the spring of 1858 in the Newcastle-upon-Tyne Registration District. Census returns identify two daughters.