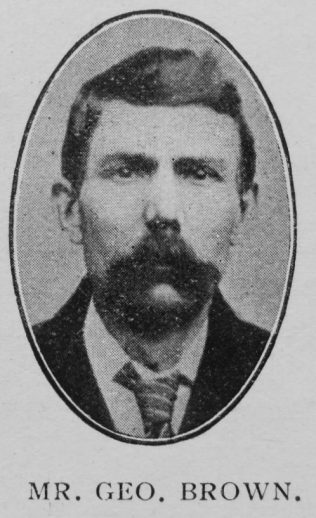 Transcription of obituary published in the Primitive Methodist Magazine by I.T.G.

It was a sad day for the Society at Porth when our dear brother, George Brown, heard the call which all must obey, and passed the boundary line which separates the life in the flesh from the life on a higher plane, the nature and vehicle of which we know so little. Our brother was born at Tintinhull, in Somersetshire, and until he passed into his teens remained in that village. He attended the services of the Anglican Church. Migrating to Ystrad, in the Rhondda Circuit, and subsequently to Porth, Mr. Brown was induced to join our Church. As Class Leader, Sunday School Superintendent, and Trustee, he served faithfully and effciently. The duties of choir conductor, however, more fully brought out his gifts, and attention to those duties gave him greater pleasure than any other work he undertook. He was never happier than when conducting the musical part of the School Anniversaries, which he did for several consecutive years.

The Porth Church and Trust have had great difficulties, but the deceased was loyal, willing and ready to bear his share of the burdens. It was in the midst of another time of testing and trial that he was taken ill. This was in mid-February, and on March 4th the end came. The body was interred on the following Thursday, and was followed to the grave by a very large concourse of people. The pastor of the church conducted a short service in the house and read the committal portions in the cemetery. On March 26th a largely-attended memorial service was held. Thus was finished the earthly career of one who was sociable, hospitable, generous, sympathetic, pious though undemonstrative as to things spiritual. His wife mourns his going but hopes in God.

He married Priscilla Brimble (abt1860-1949) in the spring of 1880 in the Pontypridd Registration District, Glamorgan. Census returns identify seven of eight children.