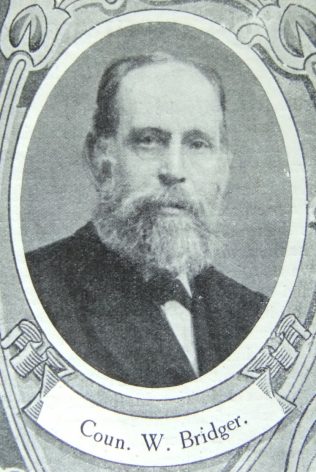 Councillor Walter Bridger, of New Fishbourne, was born fifty-seven years ago, almost under the shadow of Chichester Cathedral. As a youth he was confirmed and trained in the High Church, but at the age of thirty-three “he chose rather to suffer affliction” and persecution with the Primitive Methodists. Often have our brother and his wife been the target for mud and stone-throwing persecutors as they joined in street processions at Chichester.

Our brother is Steward of the Fishbourne Society and has over thirty years in the Sunday School as teacher and assistant superintendent. About fifteen years ago he accepted the office of Circuit Chancellor and has done splendid service, several times representing the Circuit at the Missions District Synod.

Councillor W. Bridger may rightly be styled one of the stalwarts of the South, and is a notable example of fidelity to struggling Primitive Methodism amid opposition.

Walter was born in 1852 at Chichester, Sussex, to parents Charles and Mary Ann. Charles was a bricklayer and joiner. Walter was baptised on 2 May 1852 at St Peter-the-Great, Chichester.

Walter worked as a railway signalman.