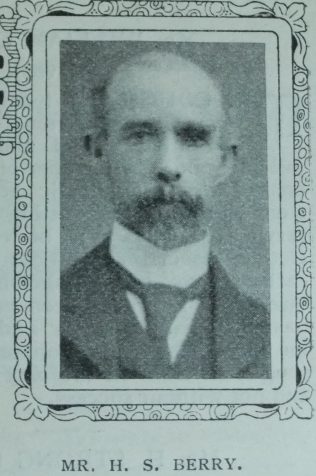 Mr. Berry was born in a village near Oxford, in 1859, and was very early brought under Methodist influences.

While an apprentice he attended a Wesleyan Sunday school, but frequently made his way to a neighbouring village to attend a Primitive Methodist Chapel.

Coming to Oxford in 1880, he definitely decided for a better life in Pembroke Street Chapel and joined the class then conducted by Rev. T. Pinnock.

In 1881 our friend migrated to the Metropolis, and at once associated himself with the Harrow Road Church in the old Camden Town Circuit. Here he soon became active in Church work, being a Sunday school teacher, assistant superintendent, and class leader, and in 1885 receiving a note to accompany Rev. G Shapcott to his week-evening appointments. Through nervousness and a natural timidity he would have given up the work of preaching, but his friends urged him to continue, and in 1887 he was received on full plan.

Coming to Walthamstow in 1890, he identified himself with our High Street Church, where, with his wife, he has worked in a most self-sacrificing and devoted way. For twelve years he was secretary to the Trust, and for three years station steward, and is a trustee for two chapels.

As a preacher – in spite of his nervousness – he excels. Earnest, clear, and thoughtful, his sermons bear evidence of careful preparation. He gives to his audiences that which costs him much. He is highly esteemed by his brethren, and as an evidence of this, he has on two occasions represented his station in the district meeting and has been a delegate to the Conference. He is yet in the prime of life and we hope for him many years of further faithful and strenuous service.

Harry was born at Bladon, Oxfordshire in December 1859, to parents Emanuel Berry and Sarah Strong. Emanuel worked the land.

Harry worked as a carpenter and joiner.

Note: In census returns before 1891 Harry is called Henry.