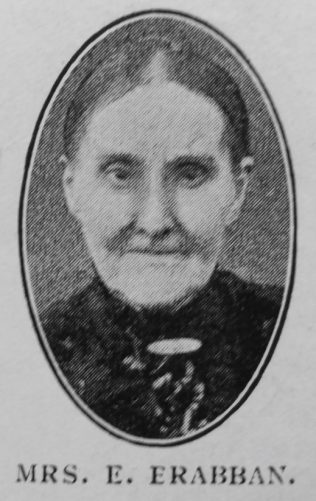 Transcription of obituary published in the Primitive Methodist Magazine by B.D.

In the spring of 1909 Elizabeth Brabban was called to her rest. The seal of immortality was clearly upon this life in which there was an almost perfect mingling of strength and sweetness. “She loved much,” and the full measure of her service is known only to her Lord.

The place of her birth was Bellingham, and the year 1840, but early in life she removed with her parents, Mr. and Mrs. Vickers, to Tow Low, where she attended our Sunday School and joined our Church. Approaching fifty years ago she came to Marley Hill and remained there until the time of her death. To our church at Marley Hill she ungrudgingly gave of her best. For over forty years she opened her house for a weekly class meeting. If a tea was to be provided, or a Bazaar organised, it could always be taken for granted that Mrs. Brabban would do her share. In the missionary cause she was an enthusiast. For more years than she could remember, with the assistance of her husband and her family, she worked a missionary collecting book, and never a year passed without the deputation sharing her hospitality.

For many years the ministers made her house their home, and would often stay for a week at a time, while they worked the surrounding places. It was her delight to tell of the coming and going of such men as the Revs. J.A. Bastow, T. Greenfield, and other heroes of bygone days.

We think sympathetically of the family who mourn her loss, and especially of the husband, left lonely and weak in the eventide of life. May his loneliness be relieved by the companionship of Him who has promised to be with us all our days, even unto the end. The funeral service held in our Marley Hill Church was largely attended, and was conducted by Revs. B. Dennison and W.E. Goodreid.

Elizabeth was born in 1840 at Knaresdale, Northumberland, to parents Jonathan, a coal miner (1851), and Mary.