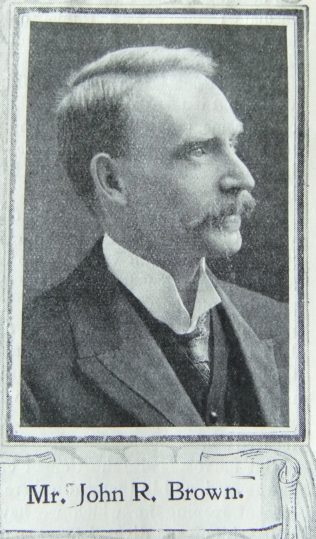 Mr. J.R. Brown, the senior steward of York First Circuit, is a son of the soil. He was born on June 1st, 1867, at Epworth, the historic birthplace of John Wesley. He owes much to the environment of a Christian home and the powerful influence of the late Rev. Parkinson Milson. Our friend has been a member about twenty-five years and a local preacher, fifteen. He is a fine preacher, evangelical, cultured and attractive. His services, which are highly appreciated, are in great demand. Before coming to York he resided at Leeds, Huddersfield and Sunderland. In all these towns he did excellent work. In addition to preaching he has taken a deep interest in Sunday School work.

At Meanwell Road, Leeds, he conducted a Bible Class. The Rev. C.R. Dalton, of Goole, was one of his scholars.

Mr Brown is held in the highest esteem for his sterling character, genial disposition, unfailing courtesy and strenuous toil.

John was born on 1 June 1867 at Epworth, Lincolnshire, to parents John and Maria. John, senior, worked the land.

Census returns identify the following occupations and locations of John.